Viral: What Ayushmann Khurrana Was Once Told By Karan Johar's Office - "We Only Work With Stars"

Karan Johar's office stonewalled him, Ayushmann Khurrana reveals in his book titled Cracking The Code: My Journey In Bollywood 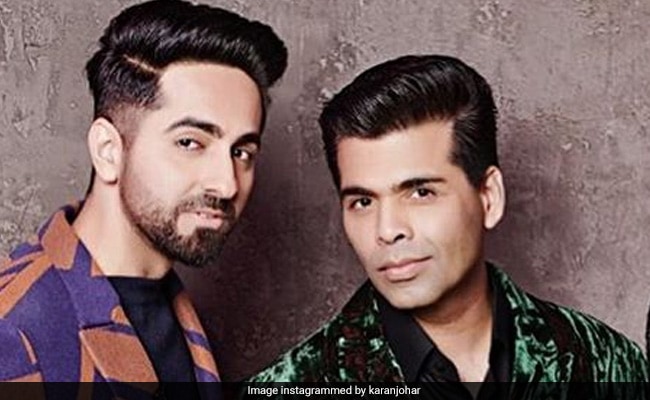 The dust refuses to settle around the public anger that has erupted on social media after actor Sushant Singh Rajput's death, allegedly by suicide. Rumours that he was boycotted by the film industry's biggest production houses have been distilled into anger focused on one particular Bollywood insider - filmmaker Karan Johar. As supporting evidence, social media is circulating an excerpt from actor Ayushmann Khurrana's 2015 book on how he became an actor; in the excerpt, now viral, the AndhaDhun star relates his experience of trying to get an audition with Karan Johar's Dharma Productions in 2007 and failing. "We only work with stars," he was allegedly told by Mr Johar's office.

In his book titled Cracking The Code: My Journey In Bollywood, Ayushmann Khurrana reveals that he once interviewed Karan Johar while working as a radio jockey; later, he told Mr Johar about his acting ambition and asked for his number, which Mr Johar gave him. "Karan gave me the landline number to his office when I met him. I should have taken a hint there and then. But I was so excited! I even planned exactly when I would make the call: sometime around 11:30 am, so he'd be done with breakfast and available to talk," Mr Khurrana writes.

Things didn't quite work out as planned - Karan Johar's office stonewalled him, Ayushmann Khurrana reveals. "The next day I dialled the number they'd given me. They said Karan wasn't in office. The day after that I called again. They said he was busy. And finally, my bubble burst when, the subsequent day, they told me bluntly 'We only work with stars, and can't work with you,'" he writes.

This excerpt has been shared and reshared many times over as an example of Bollywood's nepotism and reluctance to let in those who don't belong to a film family or an inside circle of some sort:

This is how Ayushmann khurrana exposed Karanjohar once #JusticeForSushantSinghRajput#karanjohargangpic.twitter.com/KEMubK0zWK

The epilogue to this story happened on Karan Johar's chat show Koffee With Karan - a show that Sushant Singh Rajput was never invited to. When he appeared on a 2018 episode with actor Vicky Kaushal, Ayushmann Khurrana told Mr Johar how Dharma Productions had stalled him years ago despite getting Mr Johar's number. The producer's unapologetic response, "I gave you the right number. That was very sweet of me! I must've thought that you have potential."

Karan Johar, who shared a post after Sushant Singh Rajput's death about how he blamed himself for not having been in touch with the actor for a year, has been shredded online. In addition, some industry voices have called out Bollywood's power play and camps, referring variously to "mean girls" and "the Bollywood Privilege Club" - while Mr Johar has not been named in these tweets, the connection is easily made in some.

Sushant Singh Rajput, 34 when he died, lost seven films in six months after the success of his 2019 project Chhichhore, politician Sanjay Nirupam has alleged. The Maharashtra government has announced that the investigation into his death will also probe reports that professional rivalry drove him to depression.