Raveena Tandon Calls Out Bollywood's "Mean Girls," Says They Tried To "Bury" Her

"Made fun of, been removed from films by heroes, their girlfriends," wrote Raveena Tandon 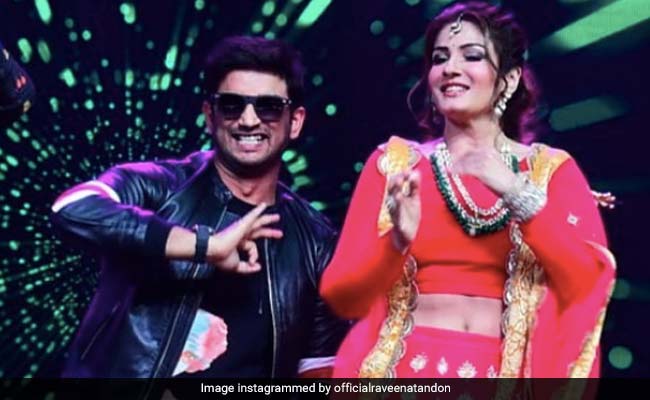 Actor Sushant Singh Rajput's death has opened the floodgates on a deluge of recriminations against the film industry he belonged; on social media, many, including some insiders, have accused Bollywood of operating in camps and cliques based on privilege and nepotism. In a series of tweets, actress Raveena Tandon agreed that camps exist as do "mean girls." Ms Tandon, daughter of producer Ravi Tandon and a top star of the Nineties, also revealed that she had also been made a target of what she called "dirty politics." Raveena Tandon also shared thoughts on the role of the media - "chamcha journos," specifically - in enabling the sort of power play she describes in her tweets.

"Made fun of, been removed from films by heroes, their girlfriends, journo chamchas and their career-destroying fake media stories. Sometimes careers are destroyed. You struggle to keep afloat. Fight back. Some survive, some don't," Raveena Tandon tweeted, "When you speak the truth, you are branded a liar."

Despite being born into the industry, Raveena Tandon said that it had happened to her. "The more they tried to bury me, the harder I fought back," she tweeted.

When you speak the truth,you are branded a liar,Mad,psychotic. Chamcha journos write pages&pages destroying all the hard work that you might have done.Even though born in the industry, grateful for all it has given me,but dirty politics played by some can leave a sour taste . https://t.co/uR9usJitdb

It can happen to someone born within,an "insider" as I can hear insider/outsider words,some anchors blaring away.But you fight back.The more they tried to bury me,the harder I fought back. Dirty politics happen everywhere. But sometimes one roots for good to win,and Evil to lose. https://t.co/NMIkUgkLbW

I love my industry,but yes,the pressures are high,there are good people and people who play dirty, there are all kinds,but that's what makes the https://t.co/YEXmquEDj2 has to pick up the pieces,walk again and again,with the head held high.Goodnight world.I pray for a better tmrw https://t.co/52nGxPma2m

Raveena Tandon, star of films such as Shool, Aks, Ziddi, Khiladiyon Ka Khiladi and the cult comedy Andaz Apna Apna, was labelled a "jinx" by the film industry for starring in a series of flops before her breakout role in 1994's Mohra. Ms Tandon, winner of the National Award for Best Actress for her work in Daman, is now married to distributor Anil Thadani and makes sporadic appearances in films such as 2017's Shab.

An example of Bollywood's "mean girl" behaviour has been circulating on social media since Sushant Singh Rajput's death. Filmmaker Karan Johar and Alia Bhatt, both of whom wrote tributes to the actor, have been repeatedly reminded that they spoke dismissively of him on an episode of Koffee With Karan. Actor Vivek Oberoi, who attended Mr Rajput's funeral, has also called on Bollywood to "b***h less and care more."

Sushant Singh Rajput died by suicide, police say. Before her revelatory tweets, Raveena Tandon shared a picture with him on her Instagram profile on Sunday and wrote a moving note: "Who knew that this young energetic fun-loving young man was hiding some intense sorrow deep down in his heart, hiding behind the dancing and the smiles. Wish he had reached out to some of his closest friends, Maybe, just maybe we would've been seeing a different day. I met him only twice in this lifetime, did not know him well, but his sincerity, talent and kind heart was open for all to see."

Who knew that this young energetic fun loving young man , was hiding some intense sorrow deep down in his heart,hiding behind the dancing and the smiles . Wish he had reached out to some of his closest friends, Maybe ,just maybe we would've been seeing a different day.I met him only twice in this lifetime,did not know him well , but his sincerity, talent and kind heart was open for all to see. We will never know what led a successful,handsome young soul like him to take this step, but wherever he is I wish him Grace and at peace. # #omshantishantishanti

Actors Ranvir Shorey and Nikhil Dwivedi, and filmmaker Anubhav Sinha have also called out their colleagues. In a separate tweet, filmmaker Shekhar Kapur referred to "people who let (Sushant Singh Rajput) down."

The Bollywood Privilege Club must sit down and think hard tonight.

PS- Now don't ask me to elaborate any further.

Sushant Singh Rajput, who shot to fame with Balaji Telefilms' TV soap Pavitra Rishta, was last seen in Chhichhore and the Netflix film Drive. Politician Sanjay Nirupam, who was also at the funeral, has alleged that Mr Rajput signed seven films after the success of Chhichhore but lost all the films in six months.

Maharashtra Home Minister Anil Deshmukh has announced that the investigation into Mr Rajput's death will include a probe into allegations that he was depressed because of professional rivalry.