Viral: Taimur Gets A Kiss From Mom Kareena Kapoor, A Cuddle From Dad Saif Ali Khan

A picture of Taimur Ali Khan, with parents Kareena Kapoor and Saif Ali Khan, has been shared widely on social media 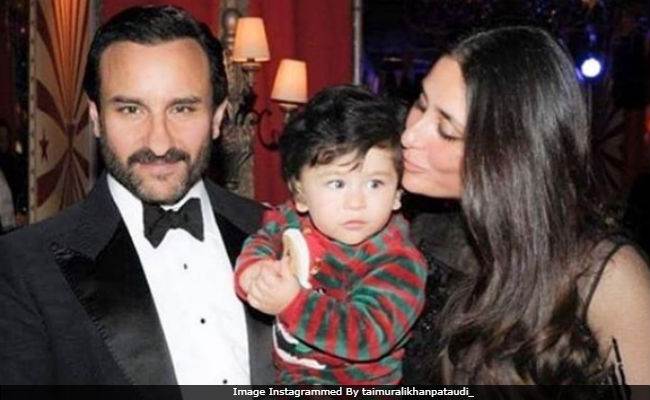 New Delhi: A picture of Taimur Ali Khan, with parents Kareena Kapoor and Saif Ali Khan, has been shared widely on social media. The picture appears to be from the family's Swiss holiday, as Kareena and Saif can be seen wearing their New Year party outfit (which was revealed by ace fashion designer Manish Malhotra). Taimur, 1, dressed in red and green, looks adorable (like always) and is cradled in Saif's arms while mommy Kareena kisses him on the forehead. Taimur, Kareena and Saif flew to Switzerland right after Christmas. They celebrated New Year there and returned to India a couple of weeks ago.

Here's the viral picture we are talking about.

Kareena and Saif's picture from their New Year bash was shared by Manish Malhotra.

This was Taimur's second vacation in the Swiss Alps (Kareena's favourite holiday destination). While they were holidaying in Switzerland, another picture of the trio, from the snowy locales of Swiss Alps, also became viral on social media.

Taimur was the star of the Kapoors' annual Christmas brunch.

Of the paparazzi's interest in Taimur, Saif said, "Kareena and I knew there would be media interest in our son. It's hard to bring up kids without the attention; I don't know how he is going to react to the attention when he grows up."