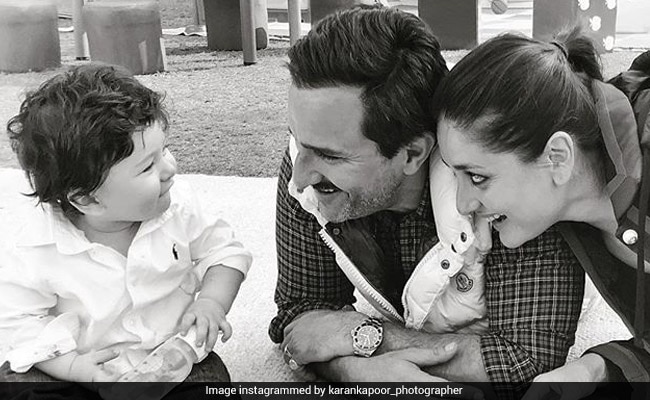 New Delhi: Another picture of Saif Ali Khan and Kareena Kapoor with little Taimur, shared by none other than Kareena and Karisma Kapoor's uncle Karan Kapoor. Yes, we are obsessed. On Friday, Karan Kapoor delighted us all with an adorable picture of Taimur with doting parents Kareena and Saif, which was taken on his first birthday at the Pataudi Palace. In the cute photo, Saif and Kareena just can't stop adoring their little munchkin (and so do we) while Taimur is just busy being adorable. We can't thank Karan Kapoor enough for sharing such a heartwarming photo and making our day. Karan Kapoor is Shashi Kapoor's son, who died in December, last year.

The picture shared by Karan Kapoor is now viral and have done several rounds on social media. The picture already has 4,994 'likes' and the comment section is filled up with compliments like: "such an adorable picture," "cutie pie Taimur" and "perfect family."

Here's the photo we are talking about.

A day ago, Karan Kapoor shared this.

Here are some other pictures from Taimur's first birthday celebrations in Pataudi featuring Karan Kapoor (the 'Bombay Dyeing' man) and others.

Amrita Arora, as Kareena's best friend, is always invited to the Kapoor-Khan dos. She posted some stunning pictures from the party.

Taimur's maasi Karisma kept fans of the Kapoors and Pataudis updated with the events in the Pataudi Palace. Karisma shared a picture of Taimur learning horse-riding with Saif Ali Khan a few days before his birthday. Later, she shared a picture of the family (including Taimur's cousins Kiaan and Samiera, and grandmother Babita) enjoying a tractor ride.

Promoted
Listen to the latest songs, only on JioSaavn.com
Karan Kapoor, now 55, gave up on Bollywood after a couple of aborted attempts. He starred in films like 1986's Sultanat with Juhi Chawla. He is best remembered for the Bombay Dyeing and other ads.

On the work front, Saif Ali Khan's Kaalakaandi released today and he will next star in Baazaar. Kareena Kapoor Khan will be seen in Veere Di Wedding, co-starring Sonam Kapoor.