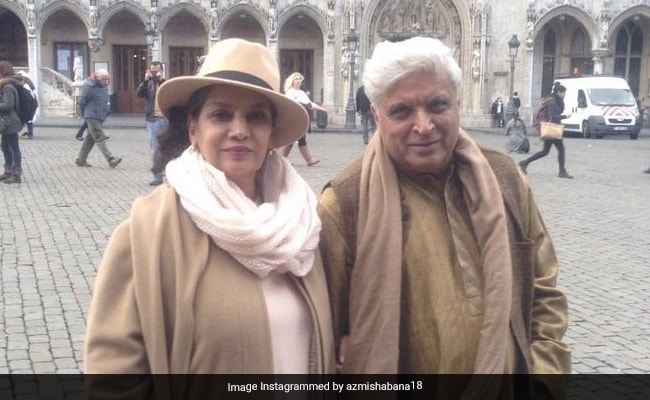 A pic of Javed Akhtar and Shabana Azmi.(Image courtesy: azmishabana18)

Actress Shabana Azmi is known for her melodious voice and terrific singing skills besides her acting skills. The 70-year-old actress sends the Internet into a meltdown whenever she croons a song. Now, an old video of the actress singing a parody version of the song Abhi Na Jao has gone viral on the Internet. The video was shared by historian Rana Safvi on Twitter on Monday. In the video, Shabana Azmi can be seen sharing a hilarious incident shared between her and her husband, poet-lyricist Javed Akhtar. Shabana can be seen sharing how Javed Akhtar responded to her when she asked him to have his soup properly without dropping it on his clothes. Javed Akhtar had a hilarious yet melodious response to Shabana as he started singing his own version of the song Abhi Na Jao. In the viral video, Shabana can be seen singing Javed Akhtar's version of the song after sharing the incident.

Take a look at Shabana singing the song here:

If you drop soup on your clothes then @Javedakhtarjaduhas the perfect response
Thank you @AzmiShabanaand you have the most beautiful voice pic.twitter.com/knAHCxrKzN

The 70-year-old actress is garnering a lot of appreciation for her singing skills in the video. As Rana Safvi shared the video on Twitter, she wrote: "If you drop soup on your clothes then Javed Akhtar has the perfect response. Thank you, Shabana Azmi and you have the most beautiful voice." Twitterati flooded the comments section of the tweet with praises for Shabana Azmi. "Couldn't have agreed more, Shabana ji owes some more songs to the audience," a Twitter user commented.

Last month, Shabana Azmi had shared a group picture featuring herself, Javed Akhtar and some of their friends from the film industry on Instagram. Others that were present in the picture include Amitabh Bachchan, Jaya Bachchan, musician Ustad Amjad Ali Khan and producer Somesh Sharma. The picture that was shared by Shabana Azmi features all the celebrities without face masks. When an Instagram user dropped a comment asking Shabana why nobody is with masks in the picture, the actress replied: "Sorry I should have said it is a throwback picture." The Instagram user's inquiry came amid the rising COVID-19 cases in the country.

Check out the group picture here:

An alumnus of the Film and Television Institute of India (FTII), Shabana Azmi made her Bollywood debut in 1974 with the film Ankur. Shabana Azmi later worked in films like Masoom, Amar Akbar Anthony and Arth among others. She married Javed Akhtar in 1984. The couple are parents to actor-filmmaker Farhan Akhtar and filmmaker Zoya Akhtar.