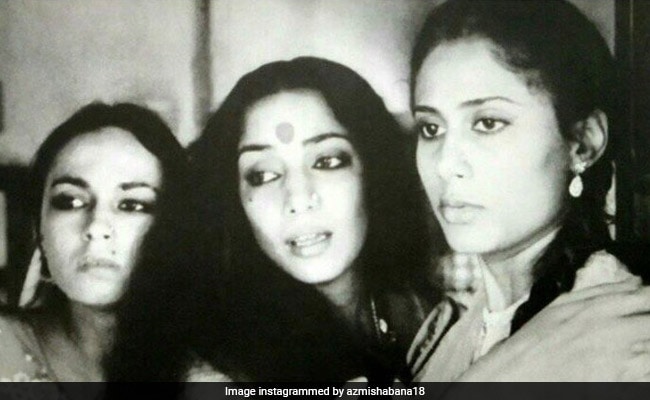 Shabana Azmi, who loves to share throwback gems from her collection, added another one to her Instagram profile on Tuesday. It happens to be a picture of Soni Razdan, Shabana Azmi and late actress Smita Patil from Shyam Benegal's filmMandi  (1983), which was an adaptation of Ghulam Abbas' classic Urdu story Aanand. The film showcased the lives of women staying in brothels and it touched upon the socio-political obstacles that they had to face. Shabana Azmi, sharing the picture on Instagram, wrote: "Still from Mandi. Look at how closely Alia Bhatt resembles her mother Soni Razdan."

Shabana Azmi's Instafam couldn't agree more with her and that clearly reflected in the comments section of her post. Shibani Dandekar commented on the post: "Carbon Copy." Actress Sandhya Mridul added, "Ohhhh my fav film and you marvellous beautiful women. And wow yes alia does look just like Soni Razdan... I told her just that when we shot recently." Smita Patil's son Prateik Babbar dropped a heart emoji in the comments section of the post.

Take a look at the post shared by Shabana Azmi here:

Alia Bhatt is Soni Razdan and filmmaker Mahesh Bhatt'a daughter. The couple are also parents to author Shaheen Bhatt, who launched a book on her battle with depression a few years ago. Alia Bhatt co-starred with her mom in the film Raazi.She worked with her father Mahesh Bhatt in the 2020 film Sadak 2, which also starred Alia's sister Pooja Bhatt along with actors Sanjay Dutt and Aditya Roy Kapur.