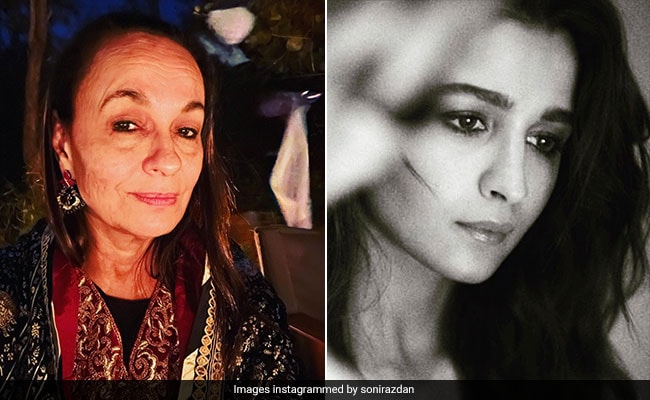 Soni Razdan's birthday-special post for daughter and actress Alia Bhatt has made our Monday better. And we must say that it speaks a lot about her love for Alia, who turned 28 on Monday. Soni Razdan shared a beautiful monochromatic portrait of her daughter Alia on the platform and wrote a heartwarming note for the actress. In the caption, Soni Razdan referred to a quote by Jawaharlal Nehru: "The art of a people is a true mirror to their minds", and wrote, "...In that case my darling you have a very special mind...may it bloom and grow forever and may you also always like what you see in the mirror..."

"...Happy Birthday Sunshine! Love you to bits and pieces and so much that they don't have a number for that," she added in the caption. See Soni Razdan's post here:

Alia Bhatt's eldest sister and actress Pooja Bhatt also wished her a happy birthday. Pooja posted a series of pictures on Instagram featuring Alia and shared that she makes her "proud". The series contains a behind-the-scenes photo of Alia in which she can be seen sitting on a chair in the make-up room. The collection also features a few posters of Alia's films such as Highway, Udta Punjab, Gully Boy and her upcoming movie Gangubai Kathiawadi.

Pooja Bhatt wrote in the caption, "The girl I will always see off-screen before she transforms like a chameleon into the dazzling array of women she gives life to on screen! Happy Birthday Alia.. you make us all so damn proud!" See her post here:

For those of you who are unaware, Soni Razdan married Mahesh Bhatt in 1986. Shaheen Bhatt and Alia Bhatt are their daughters. Mahesh was earlier married to Kiran Bhatt (Pooja Bhatt and Rahul Bhatt's mom). Shaheen and Alia are Pooja and Rahul's half-sisters. Actor Emraan Hashmi is Pooja, Rahul, Shaheen, and Alia's cousin.

Alia Bhatt is gearing up for the release of three upcoming films which are Gangubai Kathiawadi, Brahmastra and RRR. She was last seen in her father Mahesh Bhatt's directorial venture Sadak 2 in 2020, which was a sequel to his 1991 film Sadak. Alia worked with both Pooja Bhatt and Mahesh Bhatt for the first time in the 2020 film.

Speaking of Soni Razdan, the actress has worked in films such as Mandi, Saaransh, Daddy, Sir, Sadak, Raazi and No Fathers In Kashmir among others. Soni Razdan shared screen space with her daughter Alia in Meghna Gulzar's 2018 film Raazi, in which she played the role of her mother.

Alia Bhatt celebrated her birthday eve at Karan Johar's residence on Sunday (March 14). The filmmaker had invited Deepika Padukone, Ranveer Singh, Shashank Khaitan, Ayan Mukerji, Aryan Khan and others for the party. However, Alia's boyfriend Ranbir Kapoor couldn't attend her birthday bash, as he had recently tested positive for Covid-19.