What Amitabh Bachchan Posted After Receiving An Award From Martin Scorsese, Christopher Nolan 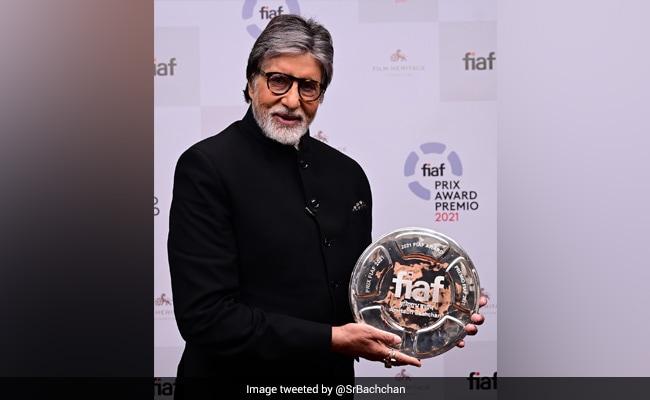 It was a big day for Bollywood veteran Amitabh Bachchan as he received an award from Hollywood filmmakers Martin Scorsese and Christopher Nolan at a virtual award ceremony on Friday. The actor shared a set of pictures from the ceremony. Big B received an award by The International Federation of Film Archives (FIAF), the organisation of film archives and museums from across the world. An excited Big B tweeted pictures from the ceremony and he wrote: "Deeply honoured to have been conferred the 2021 FIAF Award. Thank you FIAF, Martin Scorsese, Christopher Nolan for bestowing the award on me in the ceremony today." He signed off the tweet with these words: "Modern technology be praised. Connected virtually to rest of the world simultaneously."

T 3847 -
Deeply honoured to have been conferred the 2021 FIAF Award. Thank you FIAF, Martin Scorsese , Christopher Nolan for bestowing the award on me in the ceremony today.
Modern technology be praised. Connected virtually to rest of the World simultaneously .. pic.twitter.com/a6rf5IQG2Q

Martin Scorsese and Christopher Nolan, who have been previous recipients of the FIAF awards, gave the award to Big B (virtually) for his contribution to the preservation of and access to the world's film heritage. The FIAF Award was introduced in 2001 and it was presented to Martin Scorsese in the same year for his film archival efforts.

In an interview with Variety, Christopher Nolan said this about Amitabh Bachchan receiving the award, "As a past recipient of the FIAF Award, I know how imperative it is that representatives of the film industry around the world come together to ensure that we preserve our film heritage." Congratulating Amitabh Bachchan, he added, "He has played an essential role in putting the cause of film preservation on the map in India and the subcontinent."