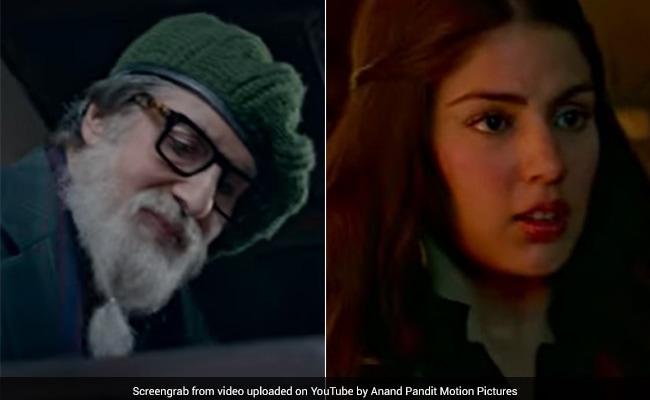 The much-awaited trailer of Amitabh Bachchan and Emraan Hashmi starrer Chehre released on YouTube on Thursday. The nearly two-minute-long trailer is full of suspense and also features a fleeting appearance by Rhea Chakraborty. The actress has been trending on Twitter ever since the release of the trailer. In Chehre, Big B plays the role of a criminal lawyer based in a hill station and Emraan Hashmi plays the role of an advertising agency's chief. Rhea's role in the film has not been revealed in the trailer and she appears only for a few seconds towards the end of the trailer. As the trailer begins, it features Emraan in the middle of a dangerous snowstorm in the mountains. Emraan ends up taking shelter at Amitabh Bachchan's cottage.

As the trailer proceeds, Big B and Emraan can be seen introducing themselves to each other and exchanging jokes. Amitabh Bachchan can be seen talking about Emraan's girlfriend (Krystle D'Souza) in the film. Soon, Emraan is introduced to a real-life game of crime and justice by Amitabh Bachchan and his friends in the cottage. The game which is introduced as a mock trial of justice in the film resembles the board game Clue.

Big B asks Emraan to play the role of the criminal in the game. The trailer then features a few glimpses of Krystle D'Souza with her hands tied. The trailer takes a turn when Amitabh Bachchan tells Emraan that the court of their game believes only in judgement and not justice. This causes Emraan to panic as he realises that he has been trapped in the house by Amitabh Bachchan and his companions. A scene then features Emraan with Rhea Chakraborty. In the scene, Emraan can be seen warning Rhea about Big B and his friends.

The trailer ends with suspense as Emraan tries to figure out ways to either win the game or escape. Chehremarks Rhea Chakraborty's first on-screen appearance after the controversy around her late boyfriend Sushant Singh Rajput's death surrounded her. She was also arrested by the NCB in connection with a drug case last year. Rhea is currently out on bail. Rhea had shared her first look from the film earlier in 2019 but makers of Chehre did not reveal her look or character from the film until the release of the trailer.

The trailer of Chehre also features Raghuvir Yadav and Siddhanth Kapoor. Directed by Rumy Jafry, the film is set to open in theatres on April 9.