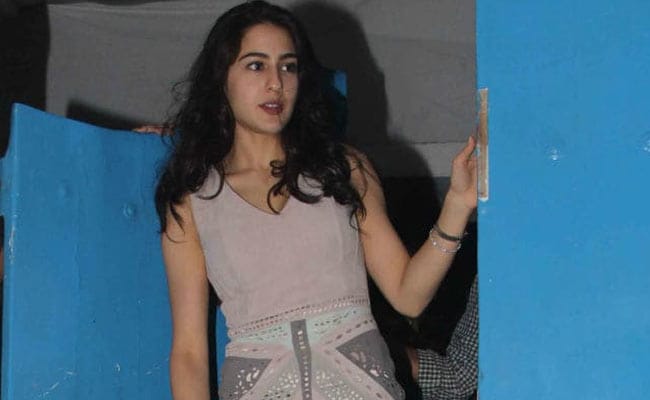 Sara Ali Khan recently found herself plonked on the list of trends after an old video from her graduation ceremony in school resurfaced on the Internet and is being shared by fan-clubs. In the video, a teenaged Sara Ali Khan can be seen collecting her graduation certificate from Nita Ambani and Aamir Khan. Sara is the daughter of Saif Ali Khan and his first wife Amrita Singh and in the video, there's just a glimpse of the proud parents. Saif and Amrita, who divorced in 2004, were visibly the loudest cheerleaders on their daughter's big day. Sara, who studied at Mumbai's Dhirubhai Ambani International School, pursued higher studies at the University Of Columbia.

Earlier this year, in an episode of unseen Koffee confessions on Karan Johar's show, the 24-year-old actress recalled the last time she hung out with mom Amrita and dad Saif together was when they flew to the US to drop her off at the university. "It was nice. I was going to college and mom had come to drop me and abba was also there. Actually my father and I were having dinner and then we decided to call mum there. Then she came and we had a good time," she said about having dinner in New York together.

On a lighter note, Sara had shared her experience of her first day in college: "And then they set me up in college together, I remember. And it was actually quite a sight because you were seeing, Amrita Singh. And for those of you who know her, it's a funny sight. Like she's making my bed! And Saif Ali Khan is putting the bulb in the lamp. And it was really very nice and I cherish that."

Sara Ali Khan made her Bollywood debut with Kedarnath last year and then starred in Ranveer Singh's Simmba. On the work front, Sara has films such as Love Aaj Kal 2 with Kartik Aaryan and Coolie No 1 with Varun Dhawan in the line-up.