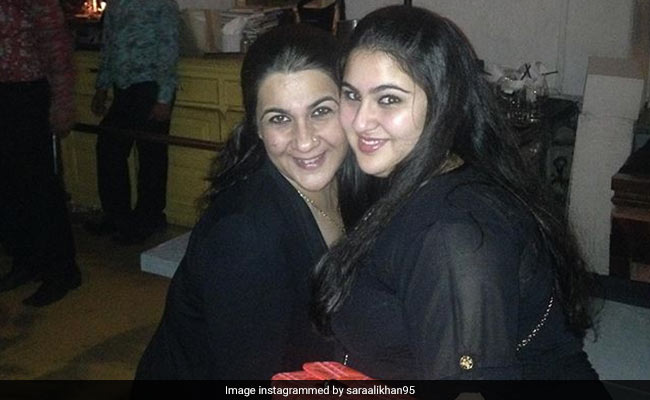 Who needs Throwback Thursdays and Flashback Fridays to travel down the memory lane? Sara Ali Khan surely doesn't. The 24-year-old actress, known for her spunky nature and outspokenness, took a trip down the memory lane and paused the timeline before her inspiring body transformation began. Sharing a photo with mom Amrita Singh, Sara did something only she can do - she added a self-directed joke in the caption: "Throwback to when I couldn't be thrown back," she wrote and added the pumpkin, burger, pizza, coke and doughnut emojis. Needless to say that Kartik Aaryan became the first celeb to drop a comment on Sara's post: "This girl looks a lot like Sara Ali khan."

Kartik's comment was followed by more ROFL remarks on Instagram, which we are sure Sara will take sportingly. "This girl looks like bahut Sara Ali Khan," read a comment while another added: "Yeh Sara nahi... Dher sara hai." Another user drew in a F.R.I.E.N.D.S reference and said: "Indian version of Monica Chandler Bing." On a serious note, fans hailed Sara for her stunning physical transformation from weighing 96 kilos to her current lean shape: "Such an inspiration!" wrote several users.

Throw to when I couldn't be thrown#beautyinblack

Sara opened up about battling Polycystic Ovarian Disease or (PCOD) as a teenager on Koffee With Karan last year: "I had PCOD. I still do. And because of that I think I put on the amount of weight that I did" she told the show host when dad Saif Ali Khan interrupted to say: "It had nothing to do with the pizzas you used to have?", referring to when Sara was studying at Columbia University. "Of course it was. I ate a lot... but I also did have PCOD which made it very hard for me to lose weight." said Sara.

On the work front, Sara has Coolie No 1 with Varun Dhawan and Love Aaj Kal 2 with Kartik Aaryan in the line-up.