Sara Ali Khan wished her fans on Eid as well. She also celebrated Easter this year 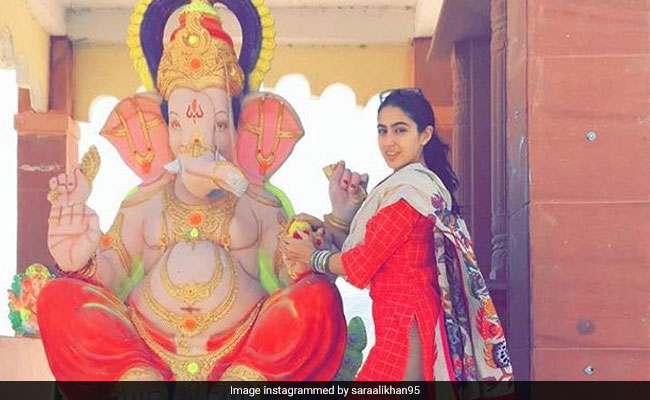 Actress Sara Ali Khan's Ganesh Chaturthi post started a dialogue on secularism in the comments thread after a section of the Internet enquired about her religion. Sara, daughter of Saif Ali Khan and his first wife Amrita Singh, celebrated Ganesh Chaturthi with a visit to a Ganpati temple and like everyone else, shared a photo on Instagram, wishing her fans. Comments like "Shame on you", "Aren't you a Muslim?" and "I thought you are a Muslim" started pouring in, also reminding her that it's the "Month of Muharram". Sara, who clearly did not need to clarify her post, found her huge fan-following jumping to her defence with positive messages and words of encouragement for her. "I will support her," was the general sentiment on Instagram as fans pointed out festivals are meant for celebrations and not trolling.

The comments on Sara's post are too impolite to be reproduced here but take a look at her post here. "Ganpati Bappa Moreya! May Ganesh Ji remove all your obstacles, and fill your year with laughter, positivity and success," she had written.

Ganpati Bappa Morya!! May Ganesh Ji remove all your obstacles, and fill your year with laughter, positivity and success. #happyganeshchaturthi

For the uninitiated, Sara Ali Khan wished her fans on Eid as well. Roping in mom Amrita Singh for an adorable photo, she kept her post simple: "Eid Mubarak."

The 24-year-old actress enjoys a massive fan-base on social media but that doesn't mean she isn't often targeted for trolling. Earlier this year, she was criticised on Twitter for posing with a Maasai tribesman for a photoshoot, accusing her of "cultural appropriation."

Two-film-old Sara Ali Khan is looking forward to two new Bollywood projects at the moment. She stars in filmmaker Imtiaz Ali's Love Aaj Kal 2, featuring her rumoured beau Kartik Aaryan. Sara has also been roped in for Coolie No 1 remake for the role originally played by Karisma Kapoor. Sara co-stars with Varun Dhawan in the film.