Ganesh Chaturthi 2019: Sara Ali Khan's Pic With Ganpati Is All About 'Laughter And Positivity'

Sara Ali Khan sent out a heart-warming post on Ganesh Chaturthi with a photo from the festivities on Instagram. 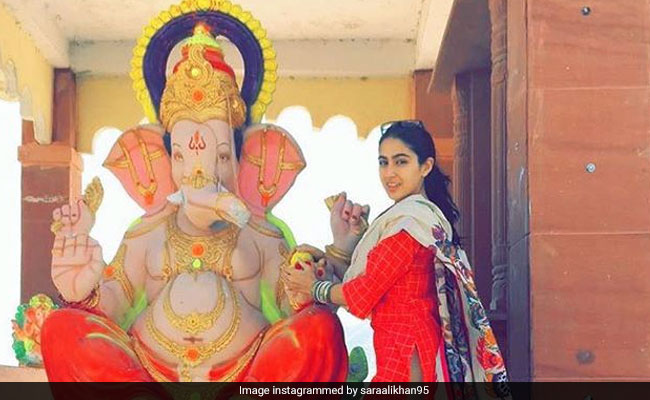 Ganesh Chaturthi means a visit to the Ganpati temple for Sara Ali Khan. The 24-year-old actress sent out a heart-warming post on Ganesh Chaturthi with a photo from the festivities on Instagram. Sara adorably posed with a Ganpati idol as she sought blessings at a temple and shared it with her fans and followers to shower them with "laughter, positivity and success": "Ganpati Bappa Morya! May Ganesh Ji remove all your obstacles, and fill your year with laughter, positivity and success." Sara Ali Khan, dressed in a red and white salwar-kameez looks adorable in the photo. The Simmba actress, who enjoys a huge fan-following, garnered as many as 3 lakh 'likes' within an hour of posting the photo.

Ganpati Bappa Morya!! May Ganesh Ji remove all your obstacles, and fill your year with laughter, positivity and success. #happyganeshchaturthi

Happy Ganesh Chaturthi everyone!! May God bless you with the ability to seize every moment and find happiness in everything you do..! spread love..

Sara Ali Khan and Kartik Aaryan's film is tentatively titled Love Aaj Kal 2 and is directed by Imtiaz Ali, who helmed the first part. Sara made her Bollywood debut with Kedarnath last year and then also featured in Simmba. She has signed two more films after that - Varun Dhawan's Coolie No 1 being the other one. Sara features in the role which was orginally played by Karisma Kapoor in the 1995 film. Directed by David Dhawan, Coolie No 1 releases on May 1.