The photo, in which Misha is missing, appears to be taken during Diwali 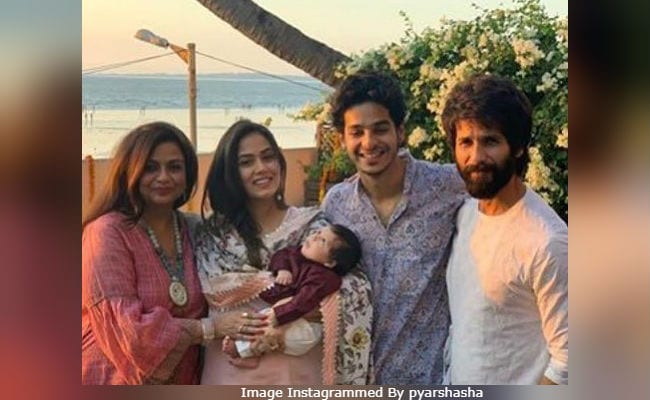 A picture of Shahid Kapoor and Mira Rajput with their newborn son Zain is doing the rounds on the Internet and is crazy viral. The photo, which appears to be taken during Diwali, also features Shahid's mother Neelima Azeem and his brother Ishaan Khatter. The family picture would have been complete if the couple's elder child Misha also featured in this million dollar photo. Little Zain, dressed in a maroon kurta and white pyjama, is cradled in his mother Mira's arms and Neelima Azeem holds him from the other side. Shahid, Mira, Neelima Azeem and Ishaan are all smiles for the cameras.

Take a look. (The picture was shared by several fan clubs).

Isn't it a cute picture?

Zain Kapoor was born to Shahid and Mira in September. Mira shared his first picture soon after Diwali. "Hello world," she wrote.

On Diwali, we were also treated to some of the best pictures from the family album.

Moments we live for.

Shahid Kapoor and Mira Rajput married in July 2015. Misha, their first child, was born in August 2016.

Last week, Mira flew to New Delhi, her hometown with Misha and Zain. She also celebrated her father Vikramaditya Rajput's 60th birthday there. Neelima Azim and Ishaan had also joined the family in Delhi.

The legend and the nightingale

On the work front, Shahid Kapoor is currently busy with the work-in-progress film Kabir Singh (Hindi remake of Arjun Reddy). Ishaan was last seen in Dhadak, which marked the debut of Janhvi Kapoor.

Shahid Kapoor and Ishaan Khatter have also shot for an episode of Karan Johar's chat show Koffee With Karan 6.