Viral: Jacqueline Fernandez And Asim Riaz Give A Sneak Peek Into Their Music Video Rehearsals 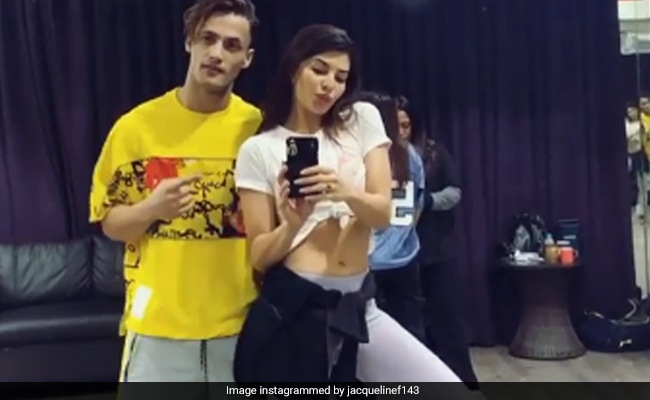 Guess who will feature alongside Jacqueline Fernandez in an upcoming music video? It's none other than Bigg Boss 13 runner-up Asim Riaz. Yes, you read it right. The model has collaborated with the actress for a music video and has even started prepping for it. A glimpse of their rehearsals was shared on social media by Jacqueline, who posted a boomerang video featuring the duo as her Instagram story and wrote: "Here we go." In the clip, Jacqueline can be seen posing with Asim in a studio. The actress can be seen sporting a white crop top and grey tights while Asim can be seen wearing a yellow t-shirt and shorts. Several fan pages dedicated to Asim Riaz shared the boomerang video on their respective accounts.

Jacqueline Fernandez will reportedly sport a boho-chic look in the music video. Talking about the track, the actress told Mumbai Mirror that she is learning "desi steps and traditional moves" for the music video, which has been directed by Radhika Rao, Vinay Sapru and produced by Bhushan Kumar. "It has been turned into a peppy track through which we will be narrating an engaging story. Shabina Khan, who is choreographing it, has given me some desi steps and traditional moves but at the same time it will be modern, too," the actress told the publication. Tanishk Bagchi has composed the track and Neha Kakkar has sung it.

Other than the aforementioned project, Asim Riaz has also announced that he will collaborate with rapper Bohemia for a track.

Asim was one of the six finalists on Bigg Boss 13, which concluded on February 15 with Sidharth Shukla as its winner.