The Russo Brothers landed in India on Wednesday 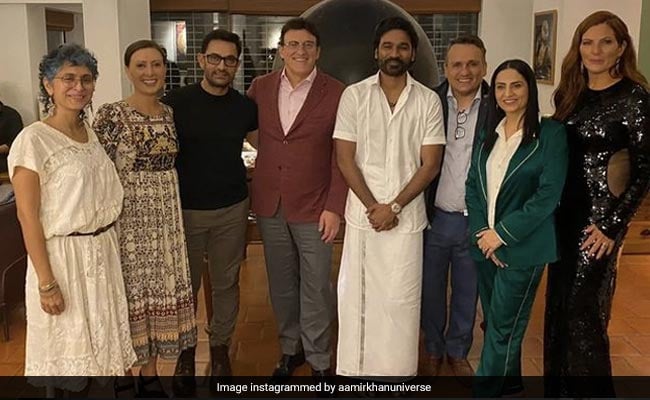 A picture shared by a fan club. (courtesy: aamirkhanuniverse)

Aamir Khan hosted a special dinner for The Gray Man directors Anthony and Joe Russo. Dhanush, who plays an as assassin in the film, also attended the get together. Also pictured at the get-together was Aamir Khan's ex-wife Kiran Rao. The picture has been curated by several fan pages dedicated to Aamir Khan on social media. According to news agency ANI, Aamir Khan treated his guests to Gujarati delicacies. "Aamir invited different chefs from diverse parts of Gujarat who specialize in cooking different traditional dishes. The chefs included those specialising in making Papad Luva Patodi, Tuver Lifafa, and Kand Puri from Surat, others who make fafda and jalebi from Surendranagar and a chef from Khambhat for Sutarfeni," ANI reported.

The Russo Brothers checked into Mumbai on Wednesday. Later in the night, a special premiere of the film was hosted in the city, which was attended by Vicky Kaushal, Jacqueline Fernandez and other stars. Meanwhile, Dhanush posted this picture with the Russo Brothers on Instagram and he wrote: "Welcome to India. Vannakam."

Aamir Khan is busy with the promotional duties of Laal Singh Chaddha, co-starring Kareena Kapoor, Mona Singh and Naga Chaitanya. The film is a Hindi remake of Tom Hanks' Forrest Gump, is slated to hit the screens on August 11.