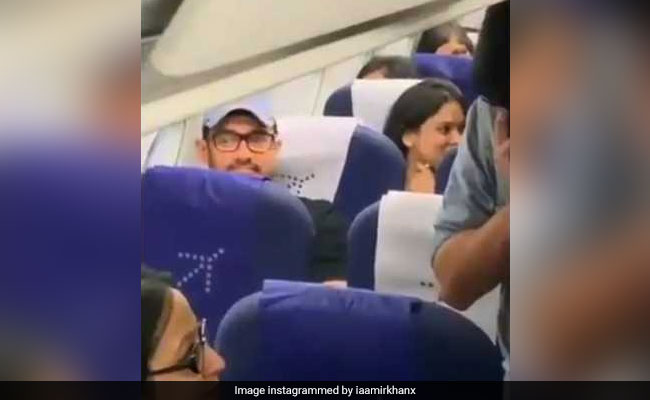 Actor Aamir Khan was recently spotted travelling in the economy class of a domestic airline, which surprised the fans of the 54-year-old star, reported news agency IANS. In a video shared by several fan clubs on social media, the Dangal, seated by the window quietly, appeared to be amused by the attention he was receiving from his co-passengers, who almost could not believe Aamir Khan there. Aamir was dressed in a pale blue cap and he was sporting his signature spectacles. Aamir Khan reaped praised from fans and followers, who lauded the actor's simplicity. One fan said: "Aamir bhai Masha Allah you are real hero economy class," while another wrote: "It's actual class of simplicity."

Aamir Khan was last seen onscreen in box office debacle Thugs Of Hindostan along with megastar Amitabh Bachchan, Katrina Kaif and Fatima Sana Sheikh. He announced his new film Lal Singh Chaddha, the Hindi adaptation of Tom Hanks classic Forrest Gump, on his birthday. Speaking about the prep work for the film, Aamir Khan had said: "We have started the prep work on the film. The shoot will start from October. I will be prepping for six months. I have to lose weight. I will be losing 20 kilos. I have to be lean and slim."

It was also reported that Aamir Khan is planning to adapt the Mahabharata in a web-series however, the actor hasn't conformed about the project yet. Aamir Khan, who was sifting through several scripts, hasn't announced any other project.