Suhana and Shanaya's viral picture has been shared by Sanjay Kapoor 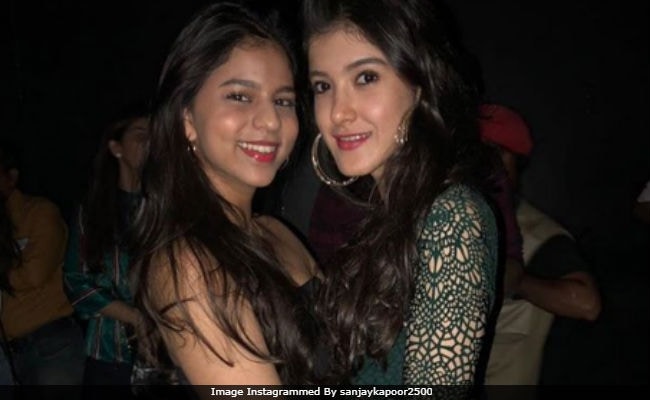 New Delhi: A picture of superstar Shah Rukh Khan's daughter Suhana, posing with her best friend Shanaya Kapoor, is now viral. The picture has been shared by actor Sanjay Kapoor (Shanaya's dad) with the caption, "They grow up so fast." Suhana, Shanaya and Ananya Panday (Chunky Panday's daughter) are often spotted together at several parties and get-togethers. Ananya is missing from the picture in which, Suhana is seen holding Shanaya and is smiling for the cameras. Suhana, 17, is dressed in black spaghetti top and jeans while Shanaya, 18, is seen wearing a green-coloured top and blue jeans. "Pretty girls" and "they are so gorgeous" are some of the comments posted on their viral picture.

Take a look at Suhana and Shanaya's picture here.

They grow up so fast

Shah Rukh Khan and Gauri married in 1991. Apart from Suhana, they are parents to sons - Aryan, 19 and AbRam, 4. Aryan is currently studying films at the University of Southern California while Suhana and AbRam are students of Mumbai's Dhirubhai Ambani International School.

Shanaya is Sanjay Kapoor's daughter with wife Maheep. They are also parents to son Jahaan.

Promoted
Listen to the latest songs, only on JioSaavn.com
Here are some pictures of the BFFs.

Months ago, Suhana showed up at the Lakme Fashion Week in white jeans and a black halter-neck top. Suhana, Ananya and Chunky Panday's nephew Ahaan also accompanied Suhana to the show.