New Delhi: The last rites of actor-politician Vinod Khanna were held in Mumbai on Thursday evening. The funeral was attended by Mr Khanna's family and friends, including several former co-stars. Vinod Khanna died of bladder cancer in HN Reliance Foundation and Research Centre, Girgaon on Thursday morning. He was 70. Mr Khanna's body was taken home to Malabar Hills, where visitors came to pay last respects before the funeral. Amitabh Bachchan and Rishi Kapoor, both of whom co-starred with Vinod Khanna in Amar Akbar Anthony, were pictured at the funeral. Mr Bachchan reportedly left an interview midway in the morning after being told of Mr Khanna's death. 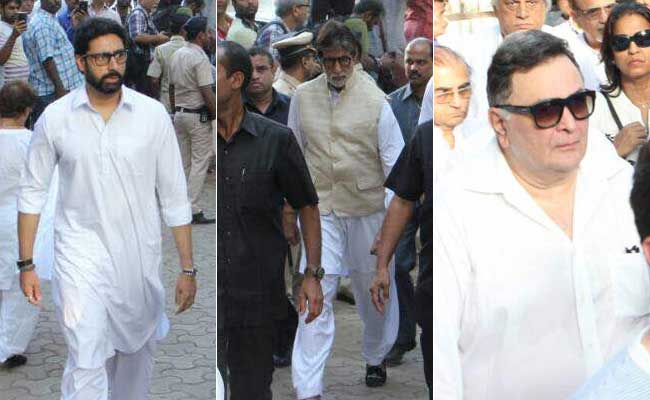 The mourners at the last rites included Vinod Khanna's Pathar Ke Insan co-star Jackie Shroff, actor Ranjeet, who was also in Amar Akbar Anthony, actors Chunky Pandey, Randeep Hooda, Puneet Issar and Kabir Bedi. Filmmakers Gulzar and Subhash Ghai, and others from the film fraternity were photographed at the funeral, as was politician Praful Patel. 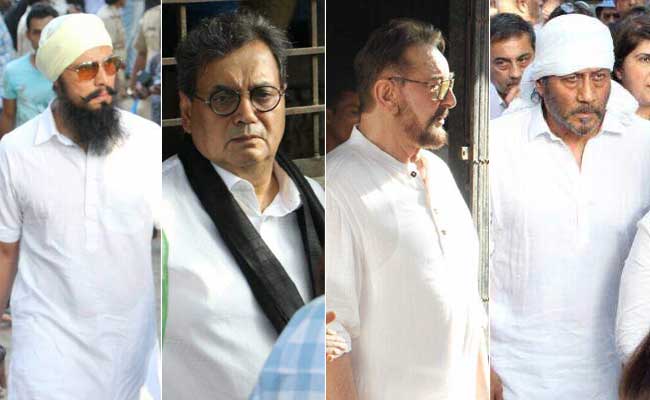 Vinod Khanna had been ill for many weeks and was taken to hospital on March 31. A statement released from the hospital on Thursday read: "Veteran actor and Member of Parliament Mr. Vinod Khanna, who was admitted to the Sir HN Reliance Foundation Hospital breathed his last at 11.20 am due to advanced bladder carcinoma."

Twitter is flooded with messages mourning Mr Khanna - among those who tweeted were President Pranab Mukherjee, Prime Minister Narendra Modi and the actor-politician's other colleagues from the BJP. Rishi Kapoor, Rajinikanth, Shatrughan Sinha, Hema Malini and others from the film fraternity also posted tweets.

There were also some tweets pleading that a photo of Vinod Khanna in hospital that went viral recently not be recirculated - the picture, which showed a shockingly frail Mr Khanna, made the rounds of social media days ago, prompting both worried posts as well as angry ones that described the photo and circulation of it as intrusive.

Vinod Khanna, who was the Member of Parliament from Gurdaspur, Punjab when he died, was the star of some of the most notable films of the 70s and 80s. His best-known work includes Gulzar's Achanak and Mere Apne; vParvarish, Hera Pheri and Muqaddar Ka Sikander with Amitabh Bachchan; and Chandni with Rishi Kapoor - apart from the cult Amar Akbar Anthony.

Mr Khanna was briefly a follower of spiritual guru Osho Rajneesh, with filmmaker Mahesh Bhatt, who told NDTV, "I am poorer today with his passing away. He was one giant who touched my heart deeply. He trusted me when I was in my struggling years. We had adventures together. We went to the spiritual enlightenment. This took us to Osho. We drank, we fought, we loved each other. He was tough, lion hearted and generous. He had the guts to risk his all."

Vinod Khanna is survived by his second wife Kavita and his four children - sons Rahul, Akshaye and Sakshi, and daughter Shraddha.