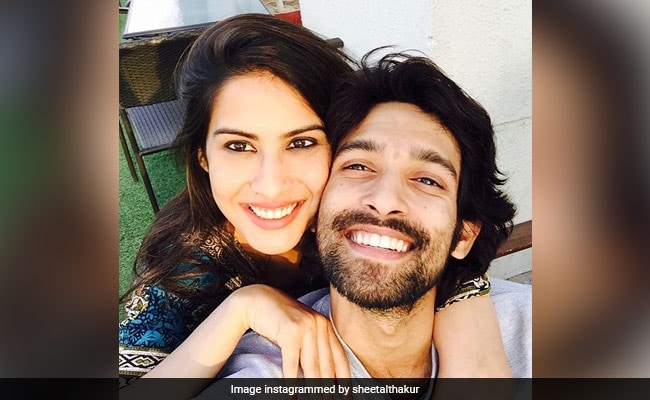 Vikrant Massey and Sheetal Thakur in a selfie (courtesy sheetalthakur)

Chhapaak actor Vikrant Massey found himself trending all of Tuesday afternoon after his recent interview to Koimoi, in which he confirmed he had a roka ceremony with long-time girlfriend actress Sheetal Thakur. After reports did the rounds on the Internet that Vikrant Massey and Sheetal Thakur had a roka ceremony earlier this month, the Lootera actor was asked about a confirmation when he told Koimoi that: "I think I would like to speak about this at the right time, but yes we had a very small private function." Without divulging more details about an impending wedding, Vikrant added that he will also share the wedding news at the "right time": "I would talk about marriage and everything at the right time."

Congratulations, Vikrant Massey and Sheetal Thakur! Vikrant and Sheetal, who have reportedly been dating for over four years, often feature in loved up posts on each other's Instagram. On the actress' birthday earlier in November, Sheetal and Vikrant made for some cute pictures.

Thank you everyone for making this day so lit Now its time to spam your feed!!! #sorrynotsorry #birthdaybehavior

On Vikrant's birthday in April, Sheetal made it special with a post, writing: "Happy happy birthday to the light of my life."

Happy happy birthday to the light of my life

On the big screen, Vikrant Massey will also be seen in Deepika Padukone's Chhapaak, which is based on the life and experiences of acid attack survivor Laxmi Agarwal. Chhapaak releases on January 10, 2020.

Oscars 2020: The Academy Awards Will Be Host-Less This Year Too