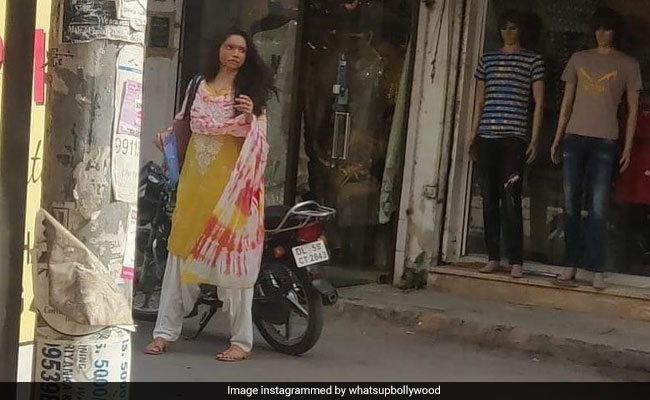 Deepika Padukone spotted on the streets of Delhi (courtesy whatsupbollywood)

Busy star Deepika Padukone is currently shooting for her new film Chhapaak in New Delhi. The 33-year-old actress was spotted on the streets of the National capital dressed as Laxmi Agarwal during the film's shoot and pictures and videos of the same are being shared by fan-clubs on social media. Deepika Padukone plays the role of Malti- a character based on acid attack survivor Laxmi Agarwal, on whose life and experiences Chhapaak is also based. She co-stars with A Death In The Gunjactor Vikrant Massey in the film, who was also spotted on the sets with her. Chhapak is being directed by Meghna Gulzar.

Here are some of the pictures and videos that are going viral on the Internet:

Deepika Padukone snapped on the sets of #Chhapaak.

#Chhapaak #DeepikaPadukone Deepika Padukone is all smiles as she is snapped on the sets of 'Chhapaak'.

Meanwhile for Deepika Padukone, it has indeed been a productive week. Here's her reaction:

A post shared by DEEPIKA PADUKONE FANCLUB (@magicaldeepikapadukone) on Apr 7, 2019 at 11:23pm PDT

Chhapaak went on floors around Holi and has been continuing with its schedule in New Delhi. Last week, she shared a glimpse of "the only kind of homework" she enjoys.

the only kinda homework I've ever enjoyed!#chhapaak

Deepika's first look as Malti was introduced last month and sent everyone in a tizzy because of her amazing onscreen transformation into the character. "A character that will stay with me forever...Malti," she had written.

Meanwhile, "A team that reads together", stays together:

Chhapaak will mark Deepika's first film after her wedding to Ranveer Singh. She is also co-producing the movie along with Fox Star Studios. Chhapaak is scheduled to hit screens on January 10 next year.

Laxmi Agarwal is now a TV show host and a campaigner with Stop Acid Attacks.