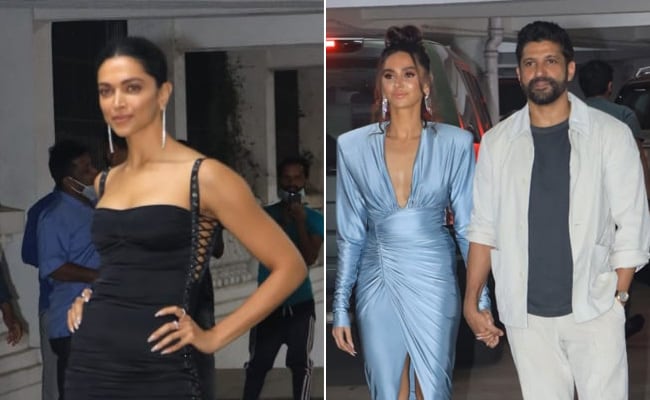 Shibani Dandekar and Farhan Akhtar's wedding festivities seem to be one long party. It continued on Thursday night at the home of Farhan's Excel Entertainment co-founder Ritesh Sidhwani who was one of Farhan's groomsmen at the ceremony last Saturday in which the couple exchanged vows at the Akhtar family property in Khandala. The guest list at the celebrations so far - mehendi, the Khandala wedding, a civil marriage in Mumbai and after party - has been restricted to Shibani and Farhan's family and closest friends. In contrast, last night's party was of the starriest sort - Deepika Padukone, Aryan and Suhana Khan, Kareena and Karisma Kapoor with best friends Malaika and Amrita Arora, Ananya Panday and Shanaya Kapoor with their families and many other celebrities were pictured at Ritesh Sidhwani's home - the dress code was party and not wedding wear.

First, the newlyweds - Shibani Dandekar, stunning in a pale blue outfit, and Farhan Akhtar posed together: 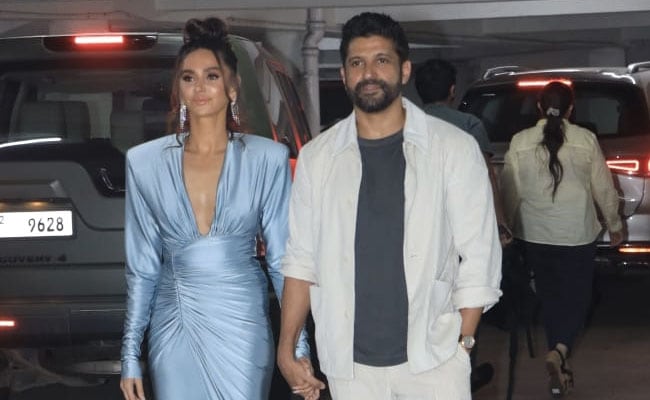 Deepika Padukone was sensational in a slinky black dress we can't imagine looking this fabulous on anyone else: 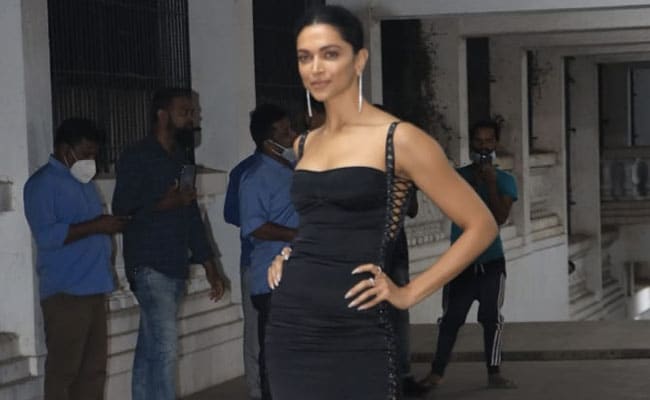 Aryan Khan and sister Suhana, along with their mother Gauri Khan attended the party. Suhana looked breathtaking in an off-shoulder black dress. 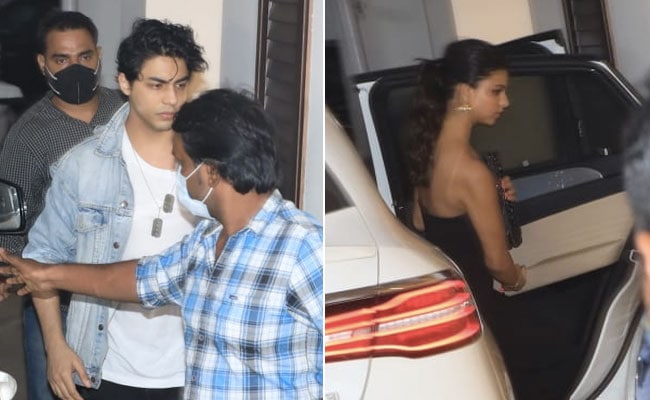 Bollywood's best known BFFs made a grand entrance together – sisters Kareena and Karisma Kapoor have been besties with Malaika Arora and her sister Amrita forever. Amrita Arora, a close friend of Shibani Dandekar, was at the mehendi and the Khandala wedding. 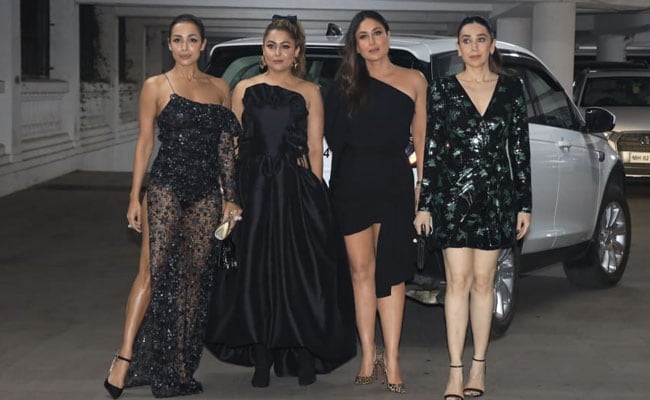 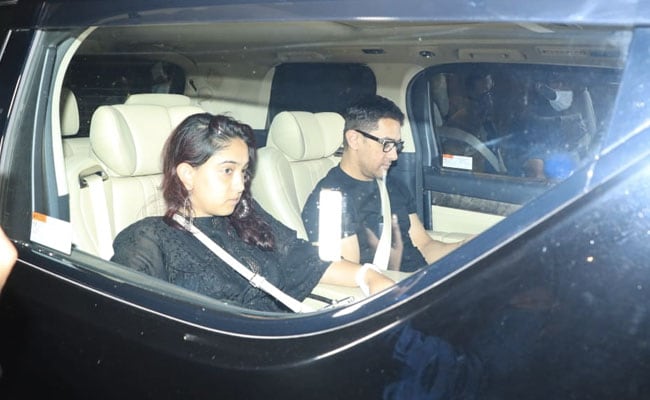 Suhana's besties Ananya Panday and Shanaya Kapoor were also at the party, Ananya in an LBD and Shanaya in a fabulous neon dress: 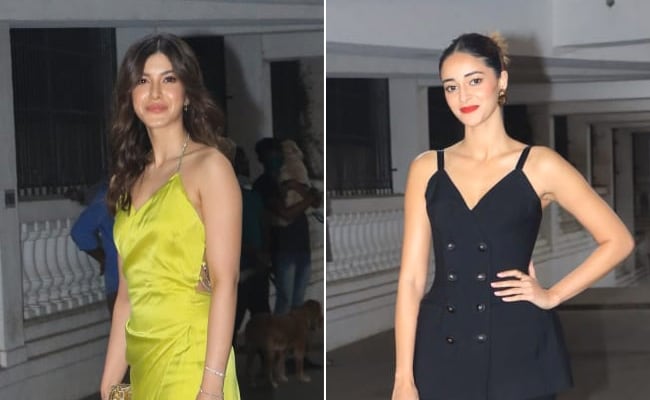 Ananya's rumoured boyfriend Ishaan Khatter was pictured solo – unlike other recent events where he has escorted the actress – as was Malaika's boyfriend Arjun Kapoor (maybe he didn't want to disrupt the squad photo of Kareena, Karisma, Malaika and Amrita): 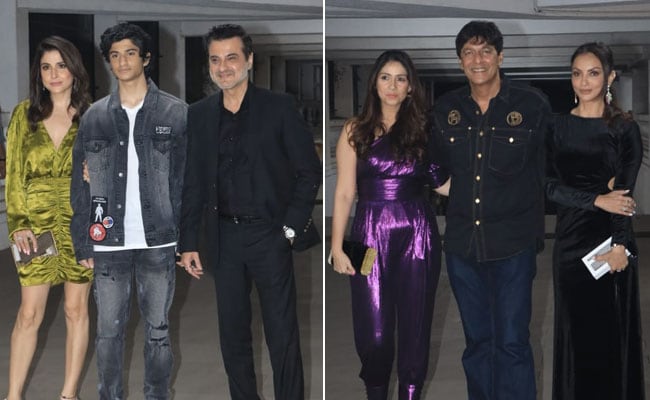 Rhea Chakraborty, who has been at all the wedding festivities, made heads turn at the party in an orange dress and the bride's sister Anusha Dandekar posed in a stunning black dress: 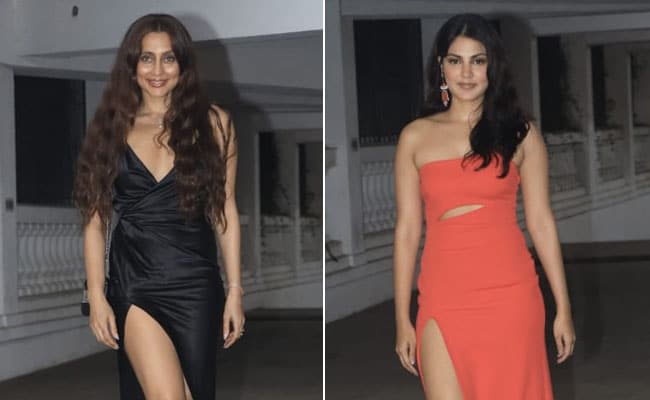 The couples' corner - Riteish Deshmukh and Genelia D'Souza made an adorable pair, as did Arjun Rampal and his partner Gabriella Demetriades: 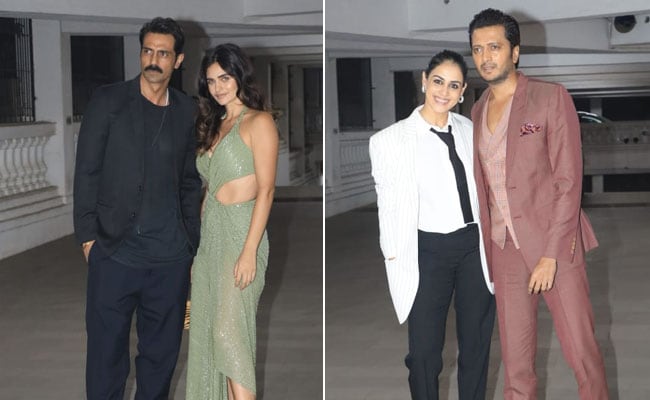 Also pictured were Tara Sutaria and Aadar Jain – Aadar, who is Kareena and Karisma's cousin, and Tara have been dating for a while: 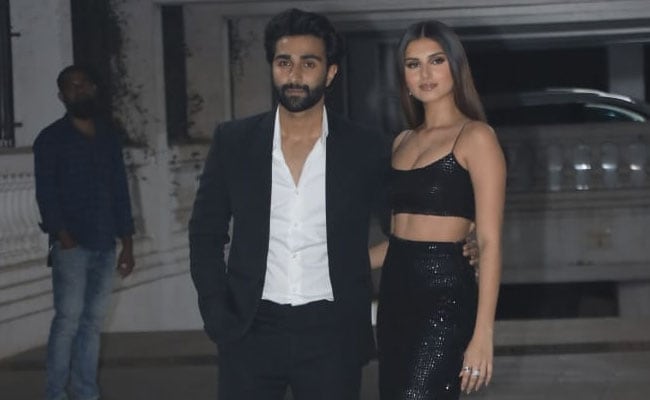 Farhan's family were at the party - Javed Akhtar and Shabana Azmi posed for the paparazzi and sister Zoya Akhtar seemed to be in a hurry. Farhan's cousin Farah Khan posed with Anil Kapoor's son HaarshVardhan: 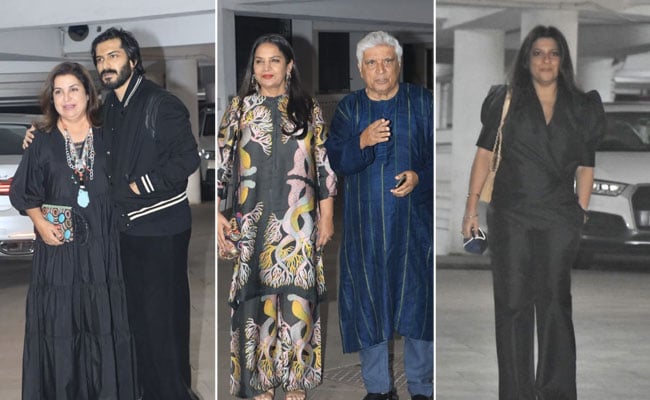 Farhan Akhtar and Shibani Dandekar went public as a couple in 2018. They married in two ceremonies recently – first, an exchange of vows in Khandala and then a registered wedding in Mumbai. The festivities were preceded by a mehendi and there was an after party once the marriage registration took place. Zoya Akhtar also hosted a dinner for the newlyweds and their guests.