In Pics: Shibani Dandekar Being A True Blue Foodie At Her Wedding

Shibani Dandekar is giving us all sorts of goals 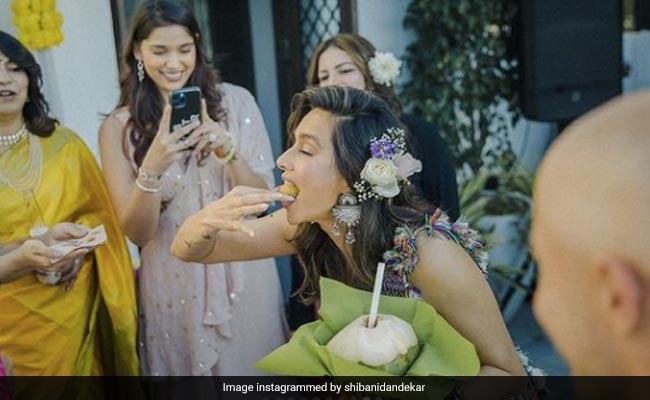 Let's just agree that Shibani Dandekar is unarguably the coolest bride in town. The singer-actress, who married actor-filmmaker Farhan Akhtar in an intimate ceremony in Khandala on Saturday, has been sharing picture-perfect moments from her wedding festivities - one day at a time. While, some pictures from the wedding look straight out of a fairytale, others are giving us all sorts of goals. Shibani and Farhan's wedding album is amalgamation of beautifully curated moments and candid shots. This is the story of Shibani Dandekar being a true blue foodie at her wedding and there are pictures that corroborate to it. One shot, in particular, that has our heart is the one where Shibani Dandekar can be seen eating a gol gappa during her mehendi. Other shots feature Shibani enjoying her beverage during her mehendi ceremony.

The paani puri picture will have a separate fanbase, for sure.

Another picture of Shibani Dandekar posing with an empty plate in her hand is just to good to miss. Groomsman Ritesh Sidhwani, who co-own Excel Entertainment with Farhan Akhtar, shared this picture and he captioned them: "A weekend full of smiles, love and laughter."