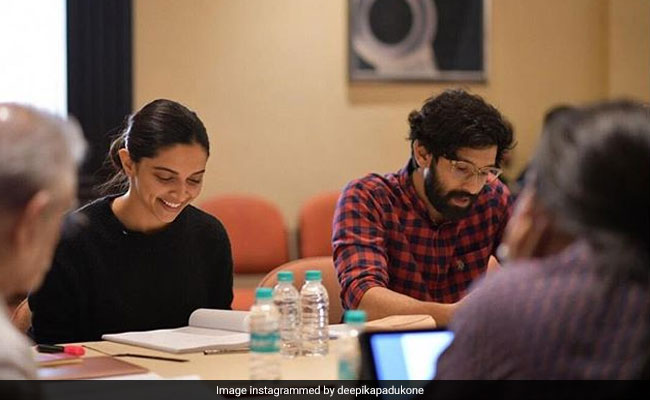 Deepika Padukone has begun work on Chhapaak - the 33-year-old actor shared photos from the script reading session with the film's team on Wednesday. In the photo, Deepika features with her co-star Vikrant Massey. Deepika will play the role of acid attack survivor Laxmi Agarwal in Chhapaak and Vikrant has been cast as her onscreen husband. Deepika borrowed a quote from Shakespeare to caption the photo and wrote: "All things are ready, if our mind be so." Meanwhile, Vikrant added two new photos to the series and wrote: "As actors, we live for this moment. Feeling blessed with the team during our Chhapaak reading session."

As actors, we live for this moment. Feeling blessed with the team during our #Chhapaak reading session@meghnagulzar @foxstarhindi @deepikapadukone

In the photos posted by director Meghna Gulzar, her lyricist-filmmaker father Gulzar and the film's team can be seen getting familiar with the script. "A team that reads together..." captioned Meghna Gulzar.

Speaking to IANS at the sidelines of an event recently, Deepika said that the film will officially go on floors next week: "It's so ironic that on the day of Holi, I am off to Delhi for the shooting of Chhapaak. We will start shooting it on Monday. It's a very important film and I feel that the story which we are showcasing in our film needs to be told."

Chhapaak will be based on the life and experiences of Laxmi Agarwal, who is now a TV show host and a campaigner with Stop Acid Attacks. Chhapaak will mark Deepika's first film after her wedding. She is also co-producing the movie along with Fox Star Studios. Just a month after her wedding, Deepika reminded her fans that she will next be seen in Chhapaak, which is "A story of trauma and triumph. And the unquashable human spirit."

Meghna Gulzar's film took off in time as this is what she had told news agency IANS earlier: "We will start the film in the third week of March 2019, and the cast is still coming together." About the film's cast, she added: "Vikrant is somebody who I wanted to work with since Raazi. And after I saw him in A Death In The Gunj... you know there are some actors that you just want to work with - and I'm just glad I got the opportunity to have a suitable character for him in this film, which is Deepika's partner."