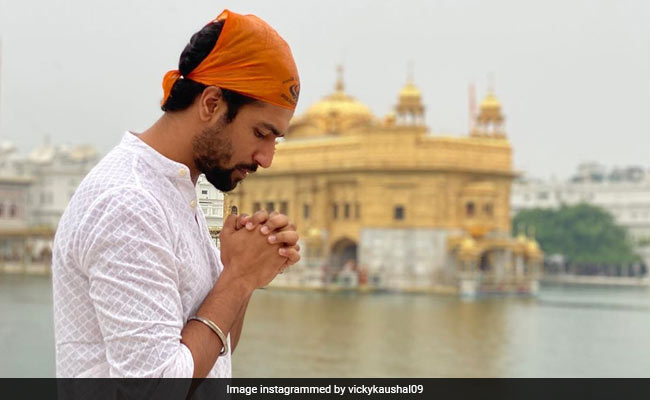 Vicky Kaushal managed to take some time out of his busy schedule and visited the Golden Temple in Amritsar. On Friday, the 31-year-old actor posted a picture from his visit on his Instagram profile. In the now viral picture, Vicky can be seen bowing his head as he stands at the temple, dressed in a white kurta, with a saffron cloth tied on his head. He captioned the post: "Baba ji, mehr bakshyo. Sardar Udham Singh, here we go." The picture is going insanely viral on the photograph sharing application and it received over 5 lakh likes within a few hours. The actor's fans wished the actor good luck for the project.

Anyone who has been following the actor on Instagram, would agree that his Instagram profile is extremely interesting. A few days ago, on his brother Sunny Kaushal's birthday, the actor dug out a throwback picture from his family photo archive and shared it on social media. "Happy Birthday, Sunny Kaushal. Love you brother," Vicky wrote.

Remember the post, in which the Masaan actor revealed his love for Indian superhero Shaktimaan?

Vicky Kaushal has a busy year ahead. Other than Sardar Udham Singh, the actor will be seen in Karan Johar's period drama Takht, Field Marshal Sam Manekshaw's biopic and Bhoot: Part One - The Haunted Ship.

Vicky Kaushal was last seen in the music video Pachtaoge, alongside Nora Fatehi. In terms of films, Aditya Dhar's Uri: The Surgical Strike remains his last release, for which he even won the National Film Award for Best Actor.