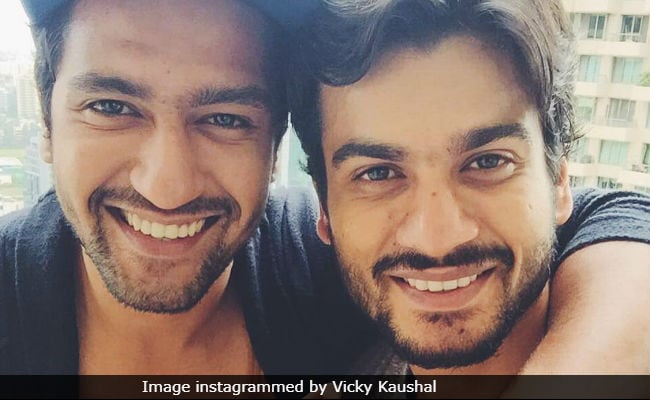 Actor Sunny Kaushal, who was recently seen in Reema Kagti's Gold co-starring Akshay Kumar, told news agency PTI that his father's name did not help him bag projects in the film industry. Sunny is the younger of stunt director Sham Kaushal's two sons. His elder brother Vicky Kaushal is also an actor. Sunny Kaushal said that he did try to use his father's name to introduce himself but 'nothing happened.' Sham Kaushal is a popular stunt and action director with films such as Dangal, "Padmaavat", Bajirao Mastani and Bajrangi Bhaijaan on his resume. "I would be lying if I say no blatantly. Initially, I used to introduce myself as, 'I am Sunny Kaushal, my father is in the industry, his name is Sham Kaushal' but nothing happened. One day, I realised I should stop doing that and never use his name again," Sunny told PTI.

Dad on the sets of his first movie as an Action Director- 'Indrajalam' (malayalam) along with Dop Santosh Sivan Sir and Director Thampi Kannantham Sir. Yesterday he completed 27 years in the industry! #superduperproud

The topic of nepotism trends on again and off again. The word recently featured in headlines after Karan Johar announced the cast of his next film Takht, which included Sunny's brother Vicky Kaushal along with Alia Bhatt, Janhvi Kapoor and Kareena Kapoor - who belong to well-established families from the film fraternity. The film also stars Ranveer Singh and Bhumi Pednekar.

Sunny Kaushal told PTI that his father was clear with his sins from the beginning that he would help neither of them to get projects. "My dad had told both Vicky and me 'Do not expect anything from me. Though a lot of people know me in the industry and they might entertain you because of that but they will not make a film with you unless you prove yourselves'," Sunny said.

Career-wise, Vicky Kaushal is more successful than Sunny with films such as Masaan, Raazi, Raman Raghvan 2.0 and Sanju to his credit. But Sunny doesn't feel pressurised by "expectations." He told PTI: "Expectations are a perception game. I take it as a positive thing because my dad and brother have achieved so much in their life. So, it is obvious that people are expecting things from me. It will only push me as an actor and help me give my best."

Apart from Gold, Sunny Kaushal featured in Sunshine Music Tours and Travels (2016) and a web series.