Takht: Vicky Kaushal And Bhumi Pednekar Share Their 'Excitement' About Being Part Of Karan Johar's Film 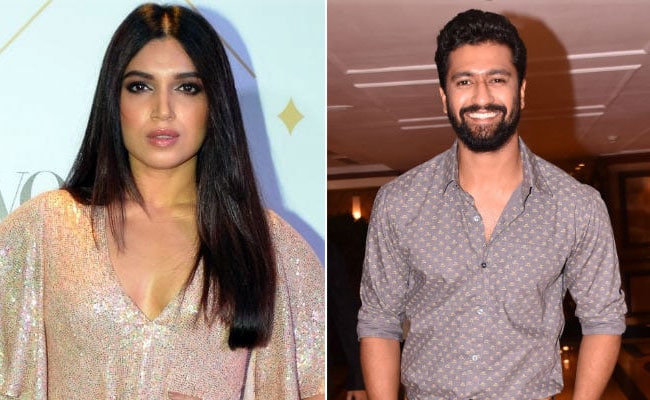 This will be Vicky Kaushal And Bhumi Pednekar's first film together

Karan Johar recently announced the cast of his next film Takhtand Vicky Kaushal and Bhumi Pednekar are both part of the team, which also features Kareena Kapoor, Ranveer Singh, Alia Bhatt, Janhvi Kapoor and Anil Kapoor. Both the actors shared their excitement about being part of Takht, which is a period drama. Vicky said that being a part of Takht was like a "dream come true" and he is "very grateful" to Karan Johar for the project, news agency IANS reported. Vicky Kaushal avoided divulging details about the film and said: "I cannot talk too much about Takht apart from the fact that I am getting an opportunity to be directed by Karan sir, and work with a fabulous set of actors. It's any actor's dream come true, so I am very grateful." Takht will be Vicky's second collaboration with Karan Johar. He had earlier featured in Netflix anthology Lust Stories in the segment directed by Karan.

Bhumi Pednekar, who is collaborating with Karan Johar for the first time, said that she is a "big fan" of the filmmaker and is "nervous" about being a part of Takht, reported PTI. "I am very excited. It's a big one for me. It's a beautiful star cast and everybody is someone who I have admired as an actor. I am very excited to be a part of this magnum opus. I am also a huge Karan Johar fan. Honestly it's still sinking in. I'm still dealing with it. I'm very nervous about being part of the film," PTI quoted Bhumi Pednekar as saying.

Vicky Kaushal, who started his career with 2012 film Luv Shuv Tey Chicken Khurana, has come a long way to becoming a prominent face in Bollywood. In a career spanning over six years, Vicky has been part of acclaimed films like Masaan, Raazi and Sanju. Vicky said that he is "happy" about getting opportunity in films, which has given him prominence. "I am happy that I am getting such chances, such films and that people are giving love. With every film, my confidence gets boosted, I feel motivated. It has been a good journey. My family is happy, I am happy," IANS quoted the actor as saying.

Vicky Kaushal will be next seen in Manmarziayan, which also stars Taapsee Pannu and Abhishek Bachchan. The trailer of the film was unveiled recently and this is what Vicky has to say about the response it is receiving: "The trailer's response has been fabulous. I loved doing this film, so I am very excited about the response."

Meanwhile, Bhumi Pednekar was recently seen in Lust Stories in the segment directed by Zoya Akhtar. She also has Sonchiriya in the pipeline.