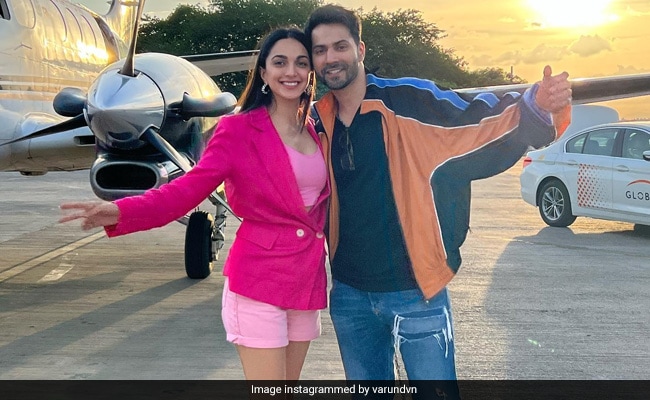 Varun Dhawan's upcoming film JugJugg Jeeyo is making all the right noises. The family drama with an ensemble cast featuring big names from Bollywood promises to be a fun ride and the team's promotional spree has been just as entertaining. Lucky for us, Varun has now shared a set of images from the promotional campaign which involves the cast visiting several Indian cities including Delhi, Ahmedabad and Kolkata, among others. Dropping images taken around the country, the actor said in the caption, “2 days go. Swipe to see my Bharat darshanJugJugg Jeeyo.” In the images, Varun is seen with his co-stars Anil Kapoor, Neetu Kapoor and Kiara Advani.

On Tuesday, Varun Dhawan was seen dancing in a video with Kiara Advani to the song Nain Ta Heere. That's not all. The clip features the version sung by Kiara herself. In the caption, she said, “Nain Ta Heere from me to you. Loved this song from the moment I heard it, so I tried singing this for you guys,” with heart emojis.

Amid promotions, Varun Dhawan also stopped to pose for a quick photo session in which he looked handsome as always. In the caption, the actor said, “Your energy can move mountains.”

Even while shooting for his upcoming film Bawaal in Berlin a week ago, Varun Dhawan did not forget to promote JugJugg Jeeyo. In the video of him dancing to the tune  of Rangisari from JugJugg Jeeyo, Varun said, “Rangisari in Berlin.” Replying to the post, Varun Dhawan's co-star Janhvi Kapoor joked, “I feel I need credits.” Karan Johar replied to the post with fire emojis.

JugJugg Jeeyo has been directed by Raj Mehta and produced by Dharma Productions and Viacom18 Studios. The film, which is scheduled to release on June 24, also stars Maniesh Paul and Prajakta Koli in pivotal roles.