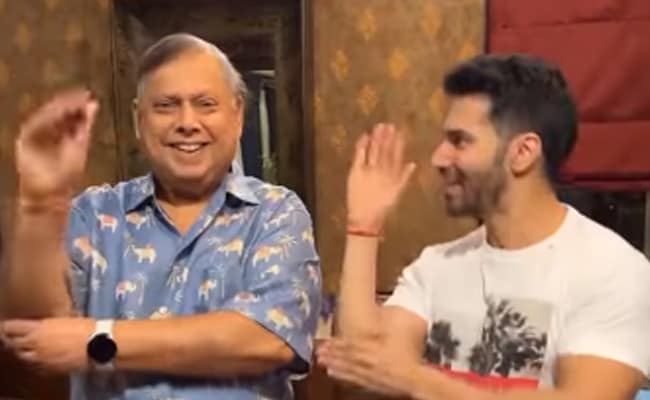 A still from video shared by Varun Dhawan. (courtesy: varundvn)

The Punjaabban Song from Karan Johar's upcoming film Jugjugg Jeeyo is making us groove crazily. And, we aren't alone. Varun Dhawan, who is starring in the film, can't stop dancing to the beats of the song. The actor has teamed up with his dad and filmmaker David Dhawan to treat us to an awesome rendition of the dance number. Varun Dhawan posted a video where we see both father and son matching steps to the song. We just love their energy. Varun's caption read, “Enjoyed doing the famstep with my dad. Since the wedding banger Naach Punjaabban is out now, send your reels with your families or loved ones.”

Kiara Advani, who is featuring in the film, dropped red heart emojis in the comment section. Sophie Choudry and Katrina Kaif followed suit.

The Punjaabban Song is the first released song from Jugjugg Jeeyo. At the beginning of the track, we see Neetu Kapoor's grand entry. She is joined by Varun Dhawan and Maniesh Paul. Later, the trio joins Kiara Advani and Anil Kapoor on the dance floor. And, once they match their steps, they set fire to the stage. The true-blue Bollywood number is sung by Gippy Grewal, Zahrah S Khan, Tanishk Bagchi and Romy. The music and lyrics are by Tanishk Bagchi and Abrar Ul Haq.

Neetu Kapoor shared a clip from the song on Instagram and wrote, “Aaja Nach Punjaabban. The Punjaabban Song is out now for you to groove.”

Kiara Advani captioned her Instagram post, “The Punjaabban Song is out now. The song that celebrates family in all its grandeur. Jugjugg Jeeyo, releasing in cinemas on 24th June.”

In case you missed it, here's the recently launched trailer of Jugjugg Jeeyo.

Jugjugg Jeeyo is produced by Viacom18 Studios and Karan Johar's Dharma Productions. It is scheduled to release on June 24, 2022.