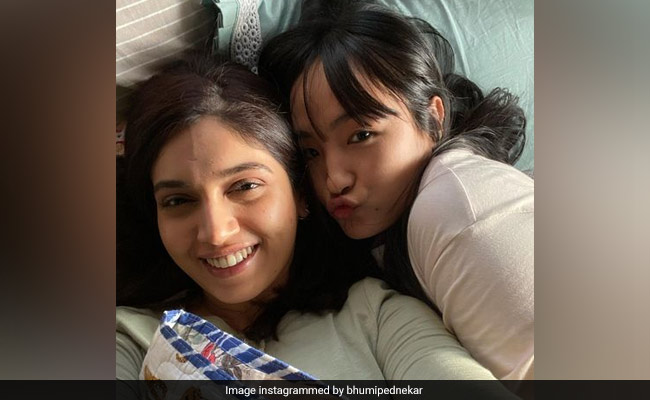 Bhumi Pednekar's adorable Valentine's Day post is for the new-age romantic. Bhumi shared a set of pictures of herself and Badhaai Do co-star Chum Darang goofing around, captioning it: “Raj Aur Simran, Heer Aur Ranjha, Sumi Aur Rimjhim, Shardul Aur Guru, Happy Valentine's Day.” She signed off with a couple of emojis – a heart and a rainbow. Bhumi and Chum play Sumi and Rimjhim in Badhaai Do, a same-sex couple navigating social norms that stigmatise relationships such as theirs. Shardul and Guru are the second same-sex romance in the film, played by lead actor Rajkummar Rao and Gulshan Devaiah in a cameo.

Per Bhumi Pednekar's caption, Sumi-Rimjhim and Shardul-Guru's stories are no less than those of the great jodis of legend. Raj and Simran (played by Shah Rukh Khan and Kajol) of Dilwale Dulhania Le Jayenge are the gold standard of filmy romance; star-crossed lovers Heer and Ranjha from Punjabi folklore are the ultimate in tragic love stories.

Set in Uttarakhand, Badhaai Do stars Rajkummar Rao as Shardul, a closeted gay man, who proposes to Bhumi Pednekar's Sumi that they enter a marriage of convenience. Sumi, who has similarly hidden her sexual orientation from her conservative family, agrees. Sumi's girlfriend Rimjhim, played by Arunachali actress Chum Darang, moves in with the couple, leading to complications with family and neighbours.

Badhaai Do has been well-received by critics and audiences alike. In his review for NDTV, film critic Saibal Chatterjee writes, “Besides the writing and the lightness of the directorial interventions, the acting by the ensemble cast is extraordinarily effective. Rajkummar Rao is never short of believable as the policeman who must grapple with a reality that is at sharp variance with what the world thinks he should be. Bhumi Pednekar is no less impressive as the girl who must take on her own immediate family and that of the man whom she 'marries'. Both are delicately written, executed and performed roles that gives Badhaai Do a firm spine.”Badhaai Do, directed by Harshavardhan Kulkarni, also stars Seema Pahwa, Sheeba Chaddha, Loveleen Mishra and Nitesh Pandey.