Badhaai Do Challenge: Bhumi Pednekar Completes It With Her "Mains" 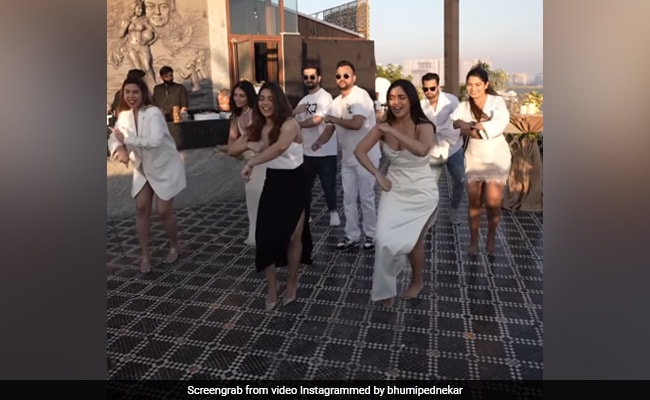 Bhumi Pednekar is excited about her upcoming film Badhaai Do and she cannot wait to share her joy with her fans and followers. Well, she did so in the most Bollywood way possible – breaking out in a dance with a group of friends. In a video shared online, Bhumi Pednekar is dancing with her sister Samiksha Pednekar and a bunch of friends to the title track of the upcoming film. In the caption, Bhumi wrote, “Badhaai Do Challenge with my mains,” asking fans to join in the celebration by posting their dance routines to the tune. Reacting to the video, Rajkummar Rao – who will be seen with Bhumi Pednekar in the film– wrote, “Kya baat hai, Bhumi. Kamaal hai.” Rajkummar Rao's wife, actress Patralekhaa said, “Cutest.”

Earlier Rajkummar Rao and Patralekhaa too shared their version in an adorable video. Here, the couple, who got married in November last year, looks amazing as they dance to the quirky number. Reacting to the clip, actress Huma Qureshi said, “Hahaha,” with a heart emoji. Director duo Raj and DK wrote, “How cool.” Director Farah Khan Kunder said, “You two are too cute.” Preity Zinta and Aparshakti Khurana replied with heart emojis.

The trailer of Badhaai Do was released last week. The plot revolves around Rajkummar Rao and Bhumi Pednekar, as members of the LGBTQ+ community, who are bound by societal pressure to get married and keep their true partners a secret. The film features Rajkummar Rao as a gay cop, who discovers that Bhumi Pednekar is dating another woman. He then decides to convince her to get married so that they can live like “roommates”, free to live their truths away from others. The wedding takes place and what follows is a comedy of errors.