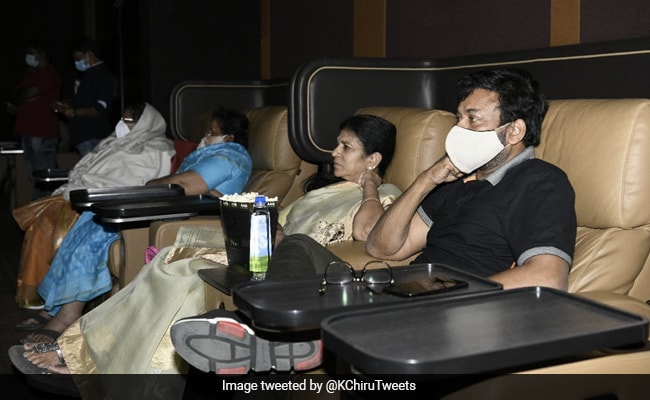 South superstar Chiranjeevi went with his family to watch his younger brother Pawan Kalyan's Vakeel Saab. Joining the megastar was his wife Surekha, daughter Susmita, and mother Anjana Devi, among other members of the family. The Konidela clan were wearing face masks as they went movie watching to a Hyderabad theatre. The images were shared by the 65-year-old star on Instagram. "Showtime #VakeelSaab," the caption read. Vakeel Saab, directed by Venu Sriram, is the Telugu remake of the Bollywood film Pink. Pawan Kalyan is portraying the character played by Amitabh Bachchan in the 2014 film.

Chiranjeevi, on Saturday, praised Pawan Kalyan's performance in the film. In a tweet, he wrote, "Terrific act by Pawan Kalyan. Riveting courtroom drama with Prakash Raj. Director of photography Vinod did a fabulous job! Congrats to Dil Raju and Boney Kapoor ji. Most of all, a hugely relevant film on respecting women. Vakeel Saab wins."

Ahead of the film's release, Chiranjeevi shared a throwback photo with Pawan Kalyan on Twitter and wished him good luck. Chiranjeevi wrote in Telugu that he is looking forward to seeing his brother's film in the theatre after a long time. "Can't wait to share my response to the film with you all. Stay tuned," he tweeted.

@PawanKalyan#VakeelSaab.Can't wait to share my response of the film with you all. Stay tuned :) pic.twitter.com/eRyVbsMke0

Pink was a widely acclaimed movie. Directed by Aniruddha Roy Chowdhury, it won the National Film Award for Best Film on Other Social Issues. The movie has been previously remade in Tamil with the title, Nerkonda Paarvai. Actor Ajith played the lead role. Vakeel Saab also stars Prakash Raj, Anjali, Nivetha Thomas and Ananya Nagalla. The film released in theatres on April 9 across the country.

Meanwhile, Chiranjeevi's next project titled Acharya is being directed by Koratala Siva. The film will also feature Chiranjeevi's son Ram Charan. Acharya is scheduled to hit the silver screen on May 13, 2021.