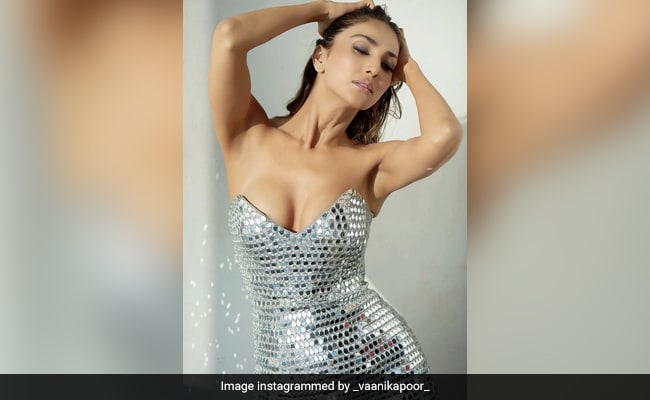 Vaani Kapoor has done it again. The actress has set the temperature soaring with a couple of sizzling pics she shared on social media. Vaani is flaunting her curves in a racy silvery dress, much to the delight of her online family. Though the photos fired up our screens, Vaani opted for an ice cube emoji as a caption. Fitness instructor Yasmin Karachiwala just dropped fire emojis to tell us what she feels about the pics. Vaani keeps enthralling her over 4 million Instagram followers with sultry snaps every now and then.

A few days back, Vaani wooed everyone posing in a pink slip dress.

The 32-year-old recently tried her hand at sculpture making. Vaani gave us glimpses of the face sculpture she worked on. Through the caption, she said, "If you can't find one...make one." And, we couldn't agree more. Vaani looked chic in a white tank top and red pants. She opted for a pair of white sneakers to go with the attire. Her friend Akansha Ranjan Kapoor cheekily commented, "Ded. hahhaha. I guess that's what's left for the two of us."

Shamshera is another interesting Vaani project. Ranbir Kapoor and Sanjay Dutt will be seen in prominent roles. The actress will portray the character of a dancer in this Karan Malhotra directorial. Then there is Chandigarh Kare Aashiqui, featuring Ayushmann Khurrana in the lead role. The movie is being directed by Abhishek Kapoor.