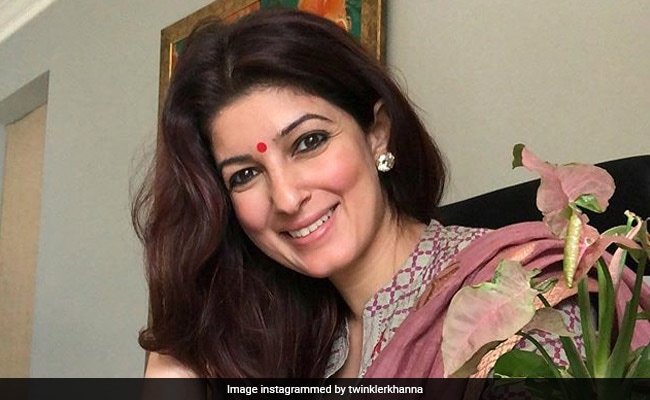 Twinkle Khanna sure knows how to delight her fans with her social media posts. The actress-turned-author shared a post on Tuesday and it's a perfect example of "serendipity." Why, you ask? It's because her post shows what happens when "life puts on its art director hat." Twinkle shared a photo, which only features her legs placed on a swing with a book kept on the top of it. The "magically colour-coordinated" things in the frame inspired Twinkle to caption her post like this: "Sometimes life puts on its Art Director hat and everything is magically colour-coordinated." She accompanied her post with the hashtag #SerendipityAtItsVeryBest. Take a look:

Sometimes life puts on its Art Director hat and everything is magically colour-coordinated. #SerendipityAtItsVeryBest

Twinkle Khanna's humour-infused social media posts always make our day. To save you the trouble, we have handpicked a few for you. Take a look:

Back home to a relaxing Sunday with lots of unpacking and cracking up while watching an old classic-Fawlty Towers. And yes, while I may not love my laugh lines, at least when people around me refer to 'Frozen' they are talking about the Disney movie and not my face :) #ALaughADayKeepsTheShrinkAway

Saris are even more forgiving than pyjamas and this one is a borrowed goodie from my sister-in-law. Recycling the old fashioned way :) #PassItOn #SariStories

Rather displeased that I am interrupting her with my paparazzi tactics, I have now been banished to my room! Another tip to turn kids into readers-Let them read what they please instead of deciding what is worthy of reading :) #bookwormlife

Twinkle Khanna married actor Akshay Kumar in the year 2001. The couple are parents to son Aarav and daughter Nitara.

On the work front, Twinkle Khanna is a former Bollywood actress and a celebrated columnist. She is the author of Pyjamas Are Forgiving, The Legend Of Lakshmi Prasad and Mrs Funnybones - all of which were best-sellers. Twinkle has worked in several films such as Mela, Jodi No. 1, Dil Tera Diwana, and Love Ke Liye Kuch Bhi Karega among others. She is also an interior decorator, the owner of The White Window, and a film producer. Her last project as a film producer was the National Award-winning film PadMan, which starred Akshay Kumar in the lead role.