"Baby: My legs are hurting too much! Me: You are becoming big, these are called growing pains. Baby: Oh so this is just part of life?' #zapped," tweeted Twinkle Khanna 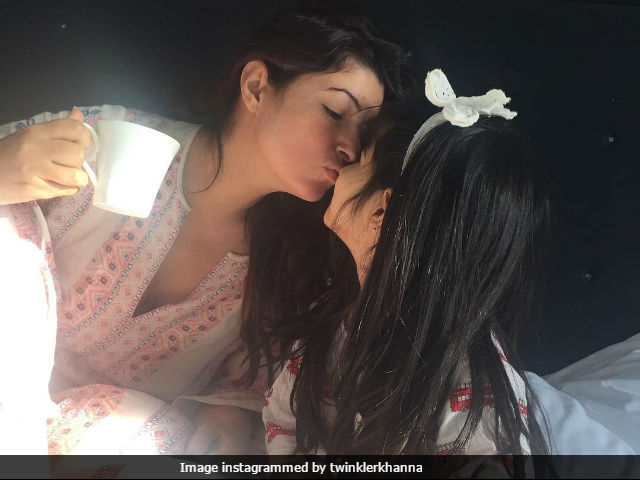 New Delhi: Twinkle Khanna aka Mrs Funnybones' four-year-old daughter Nitara has left her mother zapped once again. The actress-turned-author has now shared a hilarious conversation on Twitter in which her little girl complained that her legs were hurting but when told that these are 'growing pains' as she is becoming big, Nitara had a quirky response and said, "Oh so this is just part of life?" Well, Nitara doesn't fail to amuse us with her words just like her mother. Twinkle Khanna has been married to actor Akshay Kumar over 16 years and the couple have two children - Aarav, 15 and Nitara. Twinkle and Akshay are quite active on social media and they often delight everyone by sharing posts featuring their kids.

Baby:My legs are hurting too much! Me:You are becoming big,these are called growing pains. Baby:Oh so this is just part of life?' #zapped

Last week, Twinkle Khanna shared a joke on Twitter, summing up her late night experience due to the heavy rains in Mumbai. "Awake because of the thunderstorms and Mr K asks, 'Want to exercise? We can run up and down the building stairs!' #Yikes #MumbaiRains," she tweeted.

Awake because of the thunderstorms and Mr K asks,'Want to exercise?We can run up and down the building stairs!' #Yikes#MumbaiRains

Twinkle Khanna and Akshay Kumar were on a vacation with family earlier this month to celebrate the Khiladi actor's 50th birthday in the Swiss Alps (September 9).

Twinkle Instagrammed a picture, in which she was seen trying her hands at paragliding. See the picture here:

Twinkle Khanna is a former actress. She is best known for her role in films like Baadshah, Joru Ka Ghulam, Itihaas, Jab Pyaar Kisise Hota Hai and Mela. She quit acting in 2001 and she is now an author of two bestsellers - Mrs FunnyBones and The Legend Of Lakshmi Prasad.

Promoted
Listen to the latest songs, only on JioSaavn.com
Twinkle Khanna is also an interior designer, columnist and producer.

Twinkle Khanna has co-produced films like Patiala House and Holiday: A Soldier Is Never Off Duty, starring husband Akshay Kumar. She is now producing Padman, her first film under her own production banner Mrs FunnyBones Movies. The film, directed by R Balki, stars Akshay Kumar, Sonam Kapoor and Radhika Apte in lead roles and is slated to release next year.