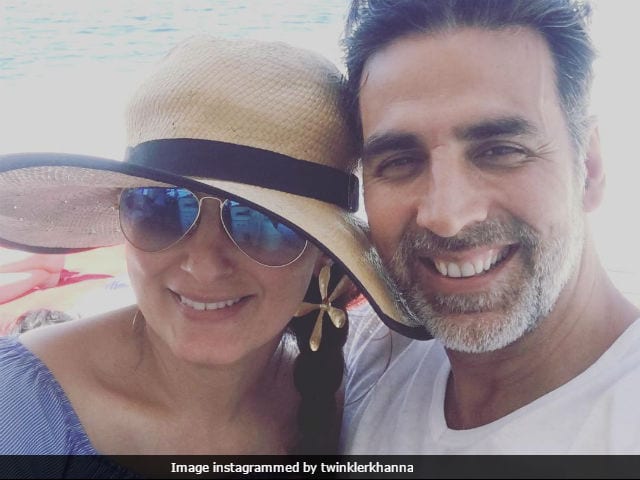 New Delhi: Twinkle Khanna aka Mrs Funnybones has time and again left us all in splits with her amazing sense of humour. The actress-turned-author has now shared a joke on Twitter which sums up her last night's experience. Twinkle Khanna and her husband, actor Akshay Kumar were awakened in the middle of the night due to powerful thunderstorm and rains in Mumbai. To make most of the time, the fitness enthusiast actor suggested an idea which seems to have frightened Twinkle a little. "Awake because of the thunderstorms and Mr K asks, 'Want to exercise? We can run up and down the building stairs!' #Yikes #MumbaiRains," she tweeted.

Awake because of the thunderstorms and Mr K asks,'Want to exercise?We can run up and down the building stairs!' #Yikes#MumbaiRains

Last month, Mumbai experienced heavy rains that disturbed the city's normal life and it was considered as the worst the city witnessed since 2005. Bollywood celebrities like Deepika Padukone, Priyanka Chopra, Alia Bhatt and Abhishek Bachchan shared their concern on Twitter and asked people to stay safe and stay indoors.

Twinkle Khanna and Akshay Kumar recently returned to Mumbai after their short vacation in the Swiss Alps where the family celebrated the Khiladi actor's 50th birthday (September 9).

Twinkle Khanna had posted a picture on her Instagram account, in which she was seen trying her hands at paragliding. "Flying off the handle comes easy - now let's see how I handle just the flying off bit," she wrote.

Twinkle Khanna got married to actor Akshay Kumar in 2009 and the couple have two children - Aarav and Nitara.

Twinkle Khanna is the daughter of actors Rajesh Khanna and Dimple Kapadia. She is a former actress, who is best known for her role in films like Baadshah, Joru Ka Ghulam, Itihaas, Jab Pyaar Kisise Hota Hai and Mela. In 2001, Twinkle Khanna quit acting and she is now an author of two bestsellers - Mrs FunnyBones and The Legend Of Lakshmi Prasad.

Promoted
Listen to the latest songs, only on JioSaavn.com
Twinkle Khanna is also a columnist, interior designer and producer. She has co-produced films like Patiala House and Holiday: A Soldier Is Never Off Duty, which feature Akshay Kumar in the lead role.

Twinkle Khanna is now producing Padman, her first film under her own production banner Mrs FunnyBones Movies. The film is being directed by R Balki and features Akshay Kumar, Sonam Kapoor and Radhika Apte in lead roles.