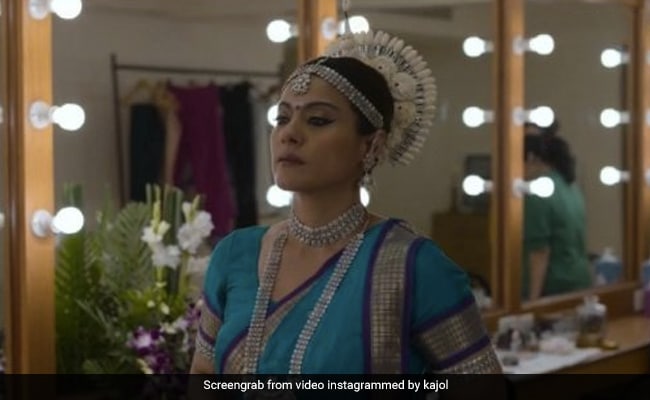 Kajol in a still from Tribhanga. (courtesy kajol)

The makers of Tribhanga shared an update in the form of a teaser on social media on Friday. The film that features Kajol in a lead role, is all set to premiere on streaming giant Netflix on January 15. The film also marks Kajol's web debut. Tribhanga also stars Mithila Palkar and Tanvi Azmi in pivotal roles. In the teaser, Kajol can be seen dressed as a classical dancer. While it's tough to decipher the film's plot based on the teaser, it appears to focus on the characters' family front and their journeys. Kajol, sharing the teaser on social media wrote: "Tribhanga matlab, tedhi, medhi, crazy, but sexy. Tribhanga, premieres 15 January, only on Netflix."

Mithila Palkar, who also stars in the film, shared the teaser and she wrote on Instagram: "Can love ever be truly unconditional? Tribhanga premieres 15th January, only on Netflix." Check out the film's teaser here:

Actress Renuka Shahane, who has directed the film, sharing the teaser on social media, thanked all three actresses for giving their everything to the film. "Dear Kajol, Tanvi, Mithila. Or should I say dear Anu, Nayan, Masha, to whom you've given your flesh, blood, vulnerability, strength, tears and laughter, making them more than I had imagined. A big thank you Kajol, Tanvi Azmi, Mithila Palkar the heart, core and soul of Tribhanga," she wrote.

Dear Kajol,Tanvi, Mithila. Or should I say dear Anu, Nayan,Masha,to whom you've given your flesh, blood, vulnerability, strength, tears & laughter, making them more than I had imagined. A big thank you @itsKajolD@tanviazmi@mipalkar the heart, core & soul of Tribhanga. pic.twitter.com/A7wfo9XmCy

The film has been produced by Kajol's husband Bollywood actor Ajay Devgn's production house Ajay Devgn Films along with Bannijay Asia and Alchemy Productions. Kajol was last seen in the short film Devi. Her last Bollywood film was the period drama Tanhaji: The Unsung Warrior.