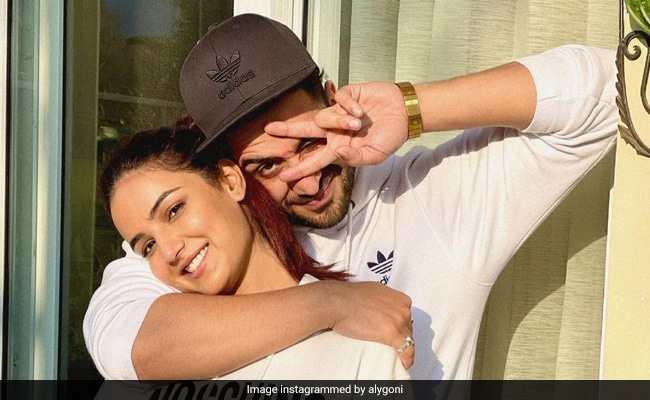 New lovebirds Jasmin Bhasin and Aly Goni occupied a spot on the list of trends on Tuesday after a video of the TV actress speaking about her wedding plans with Aly surfaced on the Internet. Jasmin and Aly were close friends before they confessed their love for each other on the now-concluded reality show Bigg Boss 14. After the show, Jasmin and Aly made their relationship Instagram official. On Tuesday, when Jasmin Bhasin was spotted by the paparazzi outside a salon in Andheri, Mumbai, she was asked to reveal her wedding plans with boyfriend Aly Goni. The actress told the photographers: "Possible hi nahi hai. Abhi toh hamari koi baat nahi chal rahi hai. Abhi toh naya naya pyar hua hai (It's not possible. We haven't even discussed it yet. It a fresh romance now)" before she burst into laughter.

The aforementioned video of Jasmin Bhasin has gone viral on social media. Check it out here:

Jasmin Bhasin and Aly Goni, who met during the TV reality show Khatron Ke Khiladi: Made In India, celebrated Holi in their own style on Monday. The duo, who recently featured in a music video titled Tera Suit, posted these adorable pics and videos of themselves from their Holi celebrations:

On Aly Goni's birthday last month, Jasmin shared a loved up photo of themselves and wrote: "Happy birthday my hero. This smile on my face in the picture is because of you and you always kept this smile on, since I met you. Looking at your eyes every day , you remind me of everything that makes me smile, you have changed my life ever since you came into my life, love you with all my heart my best friend and my love."

Karanvir Bohra "Loves The Way" His Daughter Gia Looks At Him. See His Post