"When your mother-in-law steals your thunder. Manjri Varde, you were epic! She flipped the switch," wrote Sameera Reddy 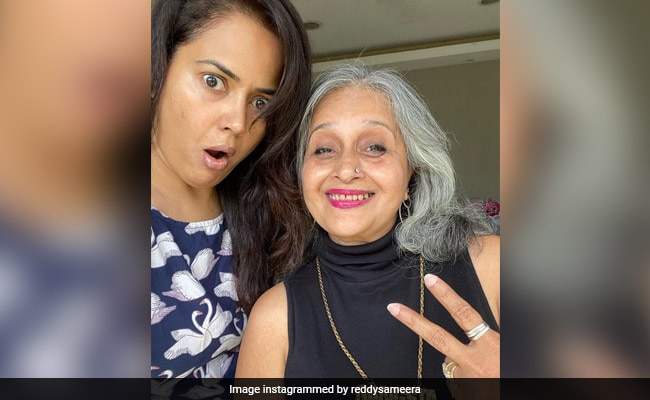 Sameera Reddy often features on the trends list and she found her way to the list recently by giving a desi twist to the viral "Flip the switch" challenge, that's been keeping folks busy on TikTok. The 39-year-old actress roped in her mother-in-law Manjri Varde for the challenge and she is such a sport! The "Flip the switch" challenge requires one person to stand in front of the mirror holding the camera while the other participant dances to Drake's Nonstop. Mid-way though the song, the people in the video switch places and clothes and TikTok makes it look like it all happened in the blink of an eye. Sameera Reddy, who created an "Indian version" of the challenge, however picked the song Flipped The Switch by Quavo and featuring Drake for her video. Sameera described her mother-in-law as the "asli gangster" in the video.

The hilarious video begins with Sameera Reddy grooving to the song in black separates while Manjri Varde, sporting a monochrome dress, holds the camera. Soon, they "flip the switch" and it's Manjri Varde who is dancing like a "gangster" in Sameera Reddy's black separates. "When your mother-in-law steals your thunder. Manjri Varde, you were epic! She flipped the switch. Thank you for being as crazy as I am. Please try this at home and tag us," Sameera captioned her post.

Take a look at the adorable video and photos here:

When your mother in law steals your thunder#asli #gangster @manjrivarde you were epic! She #flippedtheswitch thank you for being as crazy as I am . Please Try this at home and tag us !! . @oh__happy__family thank you for pushing us to do this ! #wearefamily . #motherinlaw #appreciationpost #MIL #goals #girlpower #daughterinlaw #saasbahu #ladies #letsdothis . . #fliptheswitch #fliptheswitchchallenge #momlife #keepingitreal #motherhood #takingfunseriously #imperfectlyperfect

Sameera Reddy is married to Akshay Varde and the couple are parents to son Hans and daughter Nyra, who was born in July last year. Sameera Reddy often trends for being her real-self on Instagram and also for her posts about dealing with postpartum issues. During her second pregnancy, she Only recently she also opened up about "disappearing" from Bollywood as she was struggling with body image issues after Hans was born in 2015. Sameera Reddy was last seen in Kannada movie Varadhanayaka.