Drishyam 2: The new normal on the sets of the film 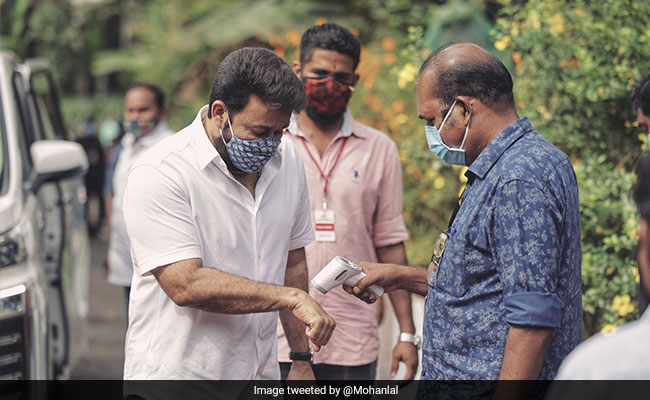 Drishyam 2: Mohanlal on the sets of the film. (courtesy: mohanlal)

Another day, another update from the sets of Drishyam 2. On Monday evening, the film's lead actor Mohanlal shared a picture from the sets of the film. In the picture, the veteran actor can be seen getting his thermal screening done as he enters the set of the film. Sharing the picture from Drishyam 2 sets on social media, Mohanlal wrote in the caption: "Drishyam 2. Location pic." Just like the first rendition of the Malayalam family thriller, Drishyam 2 is also being helmed by filmmaker Jeethu Joseph. The shooting of the film resumed earlier this month.

Earlier this month, Mohanlal posted a picture with his co-stars Meena, Ansiba, and Esther Anil. He wrote in his Instagram post: "George Kutty and family." He added the hashtags #Drishyam2 and #Drishyam. The picture happened to be from Thodupuzha (Kerala), which is the film's shooting location. ICYMI, this is the post we are referring to:

Mohanlal, who has reprised his role in the second rendition of the film, announced his association with the project on his 60th birthday. This is what the actor tweeted:

Earlier this year, there were rumours that Drishyam 2 has been shelved. However, in his Facebook post, the film's director Jeethu Joseph clarified that the filming would resume after the lockdown ended. Jeethu Joseph is also directing Mohanlal in a film titled Ram.

Drishyam is a story of a man named George Kutty (played by Mohanlal), who is on the hit list of the police after his daughter accidentally kills the villainous son of a cop.Drishyam was remade in several other languages, including a Hindi version which featured Ajay Devgn, Tabu and Shriya Saran. It was directed by late director Nishikant Kamat. The Tamil remake starred veteran actor Kamal Haasan and it was titled Papanasam.