Toofan will release on Amazon Prime Video on July 16 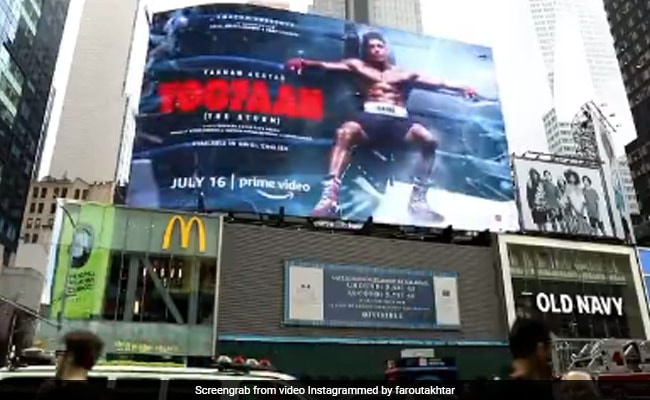 A dream just "came true" for actor Farhan Akhtar as his upcoming film Toofan's promo got featured on the billboards of New York's Times Square. The 47-year-old actor shared the amazing update about his film with his fans through an Instagram post. He shared a video of the Times Square billboards featuring Toofan's promo on Instagram. That's not it. Farhan also went down memory lane and shared an anecdote from his first visit to the Times Square. "I remember the first time I went to Times Square in NYC.. looking up at all those billboards and thinking wouldn't it be cool to have a film represented here," he wrote.

Farhan Akhtar credited Amazon Prime Video for making his "dream come true." Farhan wrote: "Well, today that dream came true .. courtesy Amazon Prime Video who are taking Toofaan across the Atlantic in all its powerful glory." He ended the note by dedicating the film's feature on the Times Square to all his "family, friends and fans in the US." He wrote: "To all my family, friends and fans in the US, this one is for you. #toofaanonprime #16thjuly."

Being the amazing partner that she is, Farhan Akhtar's girlfriend, actress Shibani Dandekar, also shared the same video on her Instagram feed. "Toofaan in Times Square!! Beast mode. Farhan Akhtar, so proud," she wrote in the caption.

Directed by Rakeysh Omprakash Mehra, Toofan is a sports-drama which is all set to release on Amazon Prime Video on July 16.