The film's poster caused a "toofan" on social media 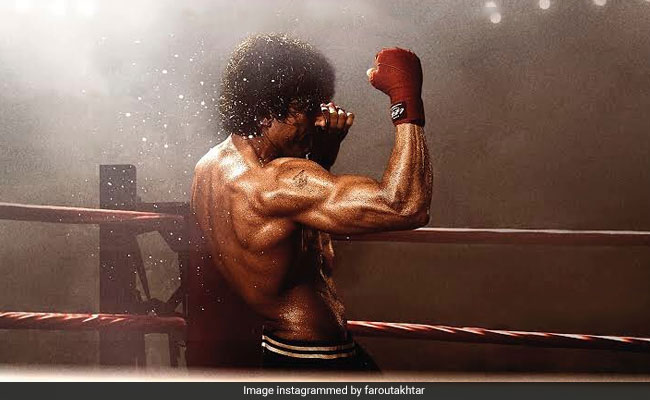 The makers of Toofan unveiled the first look of the film and if we had to sum it up in a word, we would call it "fierce." The poster features the film's lead actor Farhan Akhtar standing in a boxing ring. In the adrenaline-laced poster, Farhan, who plays a boxer, can be seen posing with boxing gloves in his hands and the expression on his face is intense. It wouldn't be wrong to say that the poster perfectly encapsulates the essence of the film's title. Sharing the film's poster on social media, Farhan wrote: "Toofan uthega. First look is here. Toofan releasing on October 2, 2020."

The film's poster caused a "toofan" (storm) on social media. It got a big shout out from Shibani Dandekar, Abhishek Bachchan, Katrina Kaif, Anil Kapoor, Siddhant Chaturvedi and other Bollywood stars. Check out the poster here:

Farhan Akhtar, who had gone through intensive training for Toofan, kept his Instafam engaged by posting several pictures and videos from his preparatory session. Take a look at the posts here:

Toofan has been directed by Rakeysh Omprakash Mehra. The sports drama will be Farhan and Rakeysh's second project together. The duo have previously worked together in the 2013 film Bhaag Milkha Bhaag, which was based on the life of legendary field sprinter Milkha Singh. The film will be co-produced by Ritesh Sidhwani, Farhan Akhtar and Rakeysh Omprakash Mehra and it also features Paresh Rawal in a pivotal role.

Farhan Akhtar is currently busy with the promotional duties of The Sky Is Pink, which also stars Priyanka Chopra, Zaira Wasim and Rohit Saraf. The film is slated to release on October 11 this year.