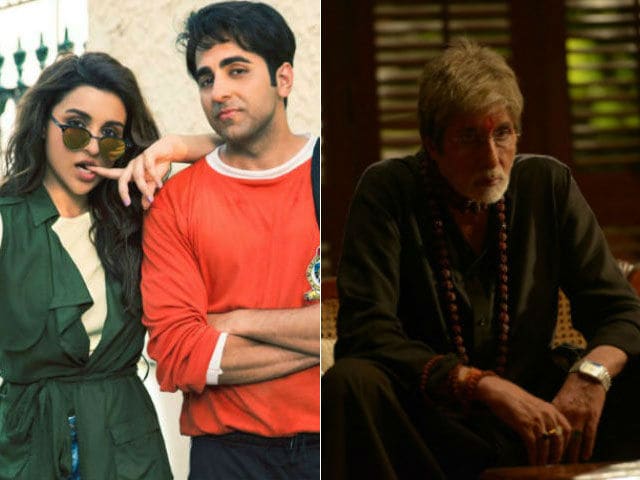 Parineeti, Ayushmann in Meri Pyaari Bindu and Big B in Sarkar 3

New Delhi: Parineeti Chopra, Ayushmann Khurrana's Meri Pyaari Bindu and Amitabh Bachchan's Sarkar 3 hits the screens today (May 12). Meri Pyaari Bindu is romantic comedy while Sarkar 3 is a serious film. Akshay Roy's Meri Pyaari Bindu is Parineeti and Ayushmann's first film together. Parineeti stars as Bindu, an aspiring singer while Ayushmann stars as Bengali writer Abhimanyu Roy. Meri Pyaari Bindu tracks Bindu and Abhimanyu Roy's love story. Of the film, the Ishaqzaade actress earlier told news agency IANS, "It was really one of the sweetest films that I read. The moment I read the script I felt this was the character that I wanted to play. The film is full of nostalgia. It has a lot of old songs which are associated with various chapters in our lives. I connected a lot to the film, so I thought I should be a part of it."

Meanwhile, in Sarkar 3, Big B returns as Subhash Nagre, 'Angrier Than Ever.' The Ram Gopal Varma directed project is the third film in Sarkar franchise. Big B co-stars with Yami Gautam, Amit Sadh, Manoj Bajpayee and Jackie Shroff in Sarkar 3. Yami plays Annu Karkare, who is bent on revenge after Subhash Nagre's destroyed her family. Amit stars as Shivaji, Subhash Nagre's grandson. Abhishek Bachchan, who was a part of the previous two films, is not reprising his role this time.

"Sarkar series is full of grey characters. There is no hero or villain. Everyone believes in their own conviction and what they stand for. So to describe anyone as positive or negative is not right," Ram Gopal Varma told PTI.