To Yash Chopra On His 85th Birth Anniversary, With Love From Bollywood 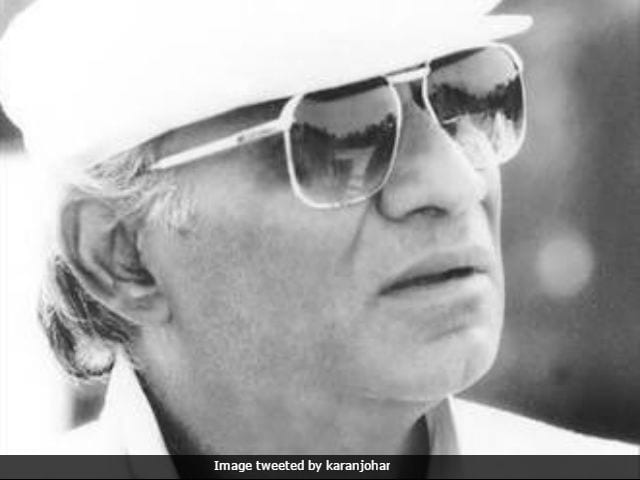 Yash Chopra is known as the 'King of Romance' of Indian cinema (Image courtesy: karanjohar)

New Delhi: Filmmaker Karan Johar shared a wonderful picture of late filmmaker Yash Chopra on Twitter and remembered him on his 85th birth anniversary. "A father to me...a hero to me.... a man I miss every day of my life," wrote the 45-year-old director. The black and white picture shared by Karan Johar shows Yash Chopra in a pensive mood. Yash Chopra has directed successful films like Kabhie Kabhie, Deewar, Dil Toh Pagal Hai, Silsila and Chandni. Mr Chopra is considered to be one of the leading filmmakers in the history of Hindi cinema and he is also known as the 'King of Romance' of Indian cinema.

Actress Anushka Sharma, who featured in Yash Chopra's last directed film Jab Tak Hai Jaan (2012) along with Shah Rukh Khan and Katrina Kaif, shared a picture on Twitter featuring herself with the director. In the picture, the 29-year-old actress can be seen embracing Yash Chopra and posing for the camera. "You will always live on in our hearts and the hearts of so many lives your movies touched #HappyBirthdayYashji," she wrote.

You will always live on in our hearts and the hearts of so many lives your movies touched #HappyBirthdayYashji . pic.twitter.com/4Ca6TPUafe

Parineeti Chopra also remembered her 'Paratha-Punjabi-partner-in-crime' on his birth anniversary. "Learnt the value of humility from you #HappyBdayYashji," she wrote. The actress featured in films Ladies vs Ricky Bahl (2011) and Ishaqzaade (2012), which were produced under Yash Raj Films banner.

Yashji u were the best part of working at YRF & my paratha-punjabi-partner-in-crime!Learnt the value of humility from you.#HappyBdayYashji

Rakesh Roshan and Bhumi Pednekar also remembered late filmmaker Yash Chopra on his birth anniversary. Here is what they wrote.

Wishing the man that made us believe in love,the king of romance,the legendary Yash Chopra sir a very happy birthday #happybdayyashji

The legendary filmmaker #YashChopra ji birth anniversary u r within all of us & will remain forever .

Promoted
Listen to the latest songs, only on JioSaavn.com
Yash Chopra's career spanned for over five decades. He won several film awards, including six National Film Awards and eleven Filmfare awards. In 2001, he was honoured with the Dadasaheb Phalke Award by the Government of India and he received the Padma Bhushan in 2005 for his contributions towards Indian cinema.

BAFTA (British Academy Film Awards) presented Yash Chopra with a lifetime membership for his contribution to films, making him the first Indian to receive the honour.