Karan Johar Trolled For Vogue Women Of The Year Cover. What's Wrong With You, Twitter? 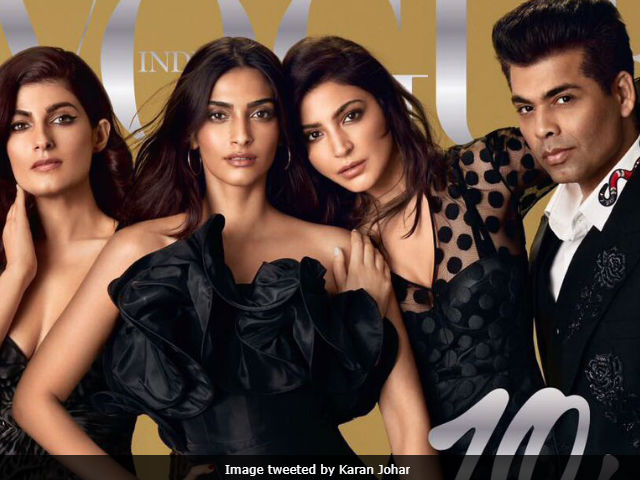 New Delhi: The version of Vogue India's 10th anniversary cover that Karan Johar appears on carries the subtitle "and the men we love" - headline: 'Women of the Year' - but that has been conveniently overlooked by Twitter, which is trolling the 44-year-old filmmaker for being one of the girls, so to speak. Vogue has issued multiple versions of its celebratory cover and Karan Johar appears on one with Twinkle Khanna, Sonam Kapoor and Anushka Sharma. Shah Rukh Khan is also one of the 'men we love,' on a cover with cricketer Mithali Raj and businesswoman Nita Ambani, but his presence doesn't seem to have jigged the trollishness of Twitter.

Social media thinks Karan Johar has absolutely no business covering a Vogue edition that celebrates women and is expressing disapproval with insults - "Four beautiful ladies," wrote one commenter, another asked, "Did you have a gender malfunction?"

Why exactly is Karan Johar standing in the 'women we love' edition of Vogue? pic.twitter.com/GfScsYwsQZ

Did you have a gender malfunction ?

Karan Johar was named Man of the Year at the Vogue Women of the Year awards held over the weekend, attended not only by those who made the cover but also Aishwarya Rai Bachchan, Gauri Khan and other achievers.

Last year, Karan Johar severely trolled trolls (in style) when he wrote about the reactions to his social media posts in Karan Affairs, a column for NDTV.com: "Why is it that every time I put up a pouting picture on Instagram, I'm just called chakka, gay, I'm told "chup kar ch***ye? That's my favourite, by the way. My absolute favourite. Anything I ever say, these three golden words are thrown at me. I maybe as sad as you, as lonely as you, as messed up as you, but here's what I also know: I'm just a lot nicer than you."

Promoted
Listen to the latest songs, only on JioSaavn.com
Back to Vogue - Karan Johar and his celeb gang had lots of fun at the event. They posted spectacular pictures and videos, which reveal what transpired on Sunday night.

We shot our own VOGUE cover!!!! This ones for you @vogueindia

Karan Johar's last film as director was Ae Dil Hai Mushkil and as producer it was Badrinath Ki Dulhania. He is awaiting the release of Ittefaq, Drive and Raazi.