Esha Deol's Birthday Note For Daughter Radhya Is As Cute As This Pic. See Post 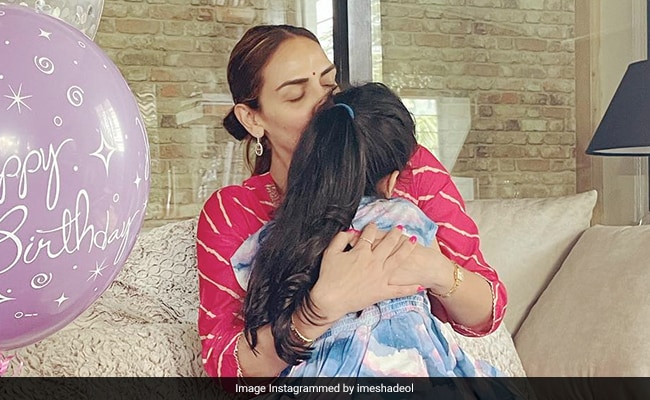 It's time for celebrations at Esha Deol's home. Her daughter Radhya turns a year older today. To make the day extra special for the little one, the actress has shared a heartwarming wish on Instagram. It wouldn't be wrong to say that the caption by Esha Deol is as adorable as the picture of the mother-daughter duo. Here, the actress is seen hugging Radhya as they sit on a couch, surrounded by birthday balloons. In her wish, Esha Deol wrote, “Happy birthday, my baby Radhya. God bless you. I love you.” She also added hashtags such as “my baby girl,” “mother daughter,” “mine” and “gratitude.” Esha Deol and her husband Bharat Takhtani are also parents to daughter Miraya.

Esha Deol also made her fans smile with this birthday wish for her younger daughter Miraya. Take a look:

In terms of work, Esha Deol made her debut in Bollywood with the 2002 film Koi Mere Dil Se Poochhe. She is also known for her performances in movies such as Kyaa Dil Ne Kahaa, Dhoom, Kaal, Main Aisa Hi Hoon, Kucch To Hai, Chura Liyaa Hai Tumne and Dus.

Esha Deol was last seen in Rudra: The Edge of Darkness alongside Ajay Devgn.

Rudra: The Edge Of Darknessesha deol

Athiya Shetty-KL Rahul Post Wedding Pics: "We Got Married In The Home That's Given Us Immense Joy"