'Time Is Getting Over Fast': Allu Arjun Writes To Wife Sneha On Anniversary

Allu Arjun and Sneha got married nine years ago and are parents to son Ayaan, 5, and daughter Arha, 3 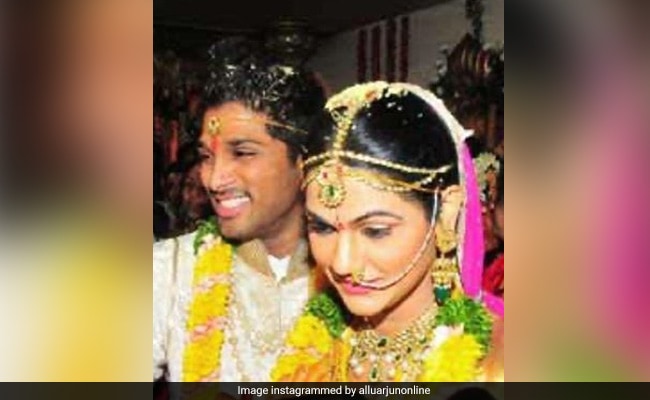 Actor Allu Arjun brought his anniversary celebrations with wife Sneha to Instagram. On the morning of his 9th wedding anniversary, the south superstar flipped through the pages of his wedding album and picked out a timeless photo from their shaadi day to write a touching note for his wife. "Nine years of marriage. Time is getting over fast. But love grows every day," he captioned the throwback photo. On his Instagram story, he shared just a glimpse of the anniversary celebrations, also featuring son Ayaan, 5, and daughter Arha, 3, and dedicated this message to Sneha: "Thank you for giving me the cutest gifts in my life, cutie." Aww. How sweet is that?

In the photo, Allu Arjun, the new groom, can be seen smiling ear-to-ear as he stands by his wife during the wedding ceremony. Sneha is dressed like a perfect south Indian bride. Their smiles in the photo say it all. 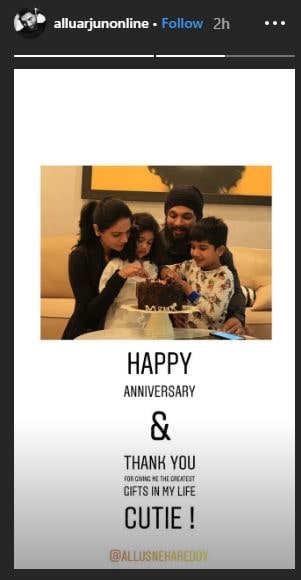 Allu Arjun and Sneha often write adorable Instagram notes to each other and feature in loved-up photos. But mostly, Allu Arjun's "cutest gifts" - the kids - dominate his Instagram.

On Sneha's birthday in Seotember 2019, the actor sent this greeting card.

On his birthday in April last year, Allu Arjun announced three new films - Icon, AA20 and one directed by filmmaker Trivikram. On the work front, Allu Arjun was last seen in January release Ala Vaikunthapurramloo.