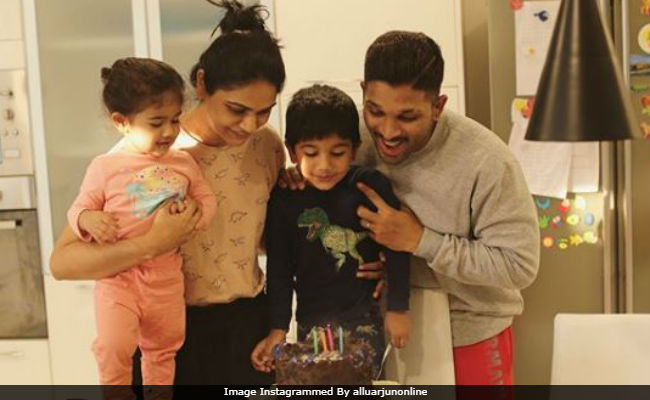 New Delhi: Allu Arjun's son Ayaan turned four on Tuesday. Telugu superstar and his wife Sneha Reddy celebrated Ayaan's birthday and the picture he posted is now viral. Ayaan's little sister Allu Arha was also there to wish him. "Happy birthday to my bestie, my bunch of happiness. My baby boy Ayaan," Allu Arjun captioned the post, which has got over 1.8 lakh likes. It was just a family-only celebration. Ayaan happily blew out the candles on his birthday cake and his doting parents stood beside him. Several users have wished Ayaan on the picture while others are happy to see a picture of them together. "Such a cute family," a comment read.

Happy Birthday to my Bestie , my Bunch of Happiness , My Baby Boy Ayaan

Promoted
Listen to the latest songs, only on JioSaavn.com
A couple of months ago, Allu Arjun and Ayaan trended for recreating Priya Prakash Varrier's viral wink from Oru Adaar Love's song. Priya shared the father-son duo's video, in which Allu Arjun while playing with Ayaan, re-enacts Priya's wink and soon, Ayaan playfully jumps on the bed. The music of Oru Adaar Love plays in the background. "That's how he does it," Priya Prakash Varrier captioned the video, adding a heart emoticon.