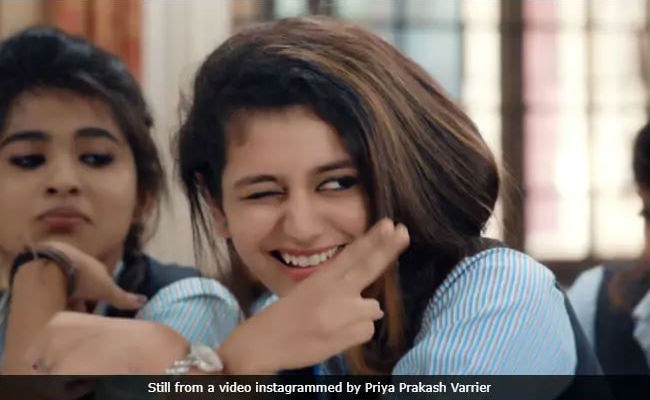 New Delhi: If anyone can wink better than Priya Praksh Varrier, then that's Allu Arjun for his three-year-old son Ayaan. The Telugu superstar recreated Priya Prakash Varrier's viral wink from Oru Adaar Love's song with his son Allu Ayaan. Priyanka instagrammed a video, in which Allu Arjun while playing with his son re-enacts Priya's wink while Ayaan playfully jumps on the bed with the music of Oru Adaar Love playing the in background. The video is absolutely adorable. It had over one lakh likes in less than an hour. "That's how he does it," Priya Varrier captioned the video along with a heart emoticon.

This was the second video from upcoming Malayalam film Oru Adaar Love, which went viral. The first one, which was part of the song titled Manikya Malaraya Poovi, was equally cute. Take a look:

Manikya Malaraya Poovi and Priya Prakash varrier recently ran into a controversy when a group of young men in Hyderabad filed a complaint against the actress and the song alleging that it has inappropriate references to the wife of Prophet Muhammad. However, earlier this week Priya Prakash Varrier, who had in turn moved the Supreme Court against the ban, got relief from the apex court, which put on hold all police cases against her over a song in her film.

Speaking to NDTV, Priya said that the controversy was "unexpected" and that the team decided to just get over with it because the negativity will affect the outcome of their film.

Oru Adaar Love is directed by Omar Lulu and the film is expected to hit the screens in June.
Comments
priya prakash varrieroru adaar loveallu arjun