"I even remember this day and being so nervous to sing in front of the legend herself!" wrote Shruti 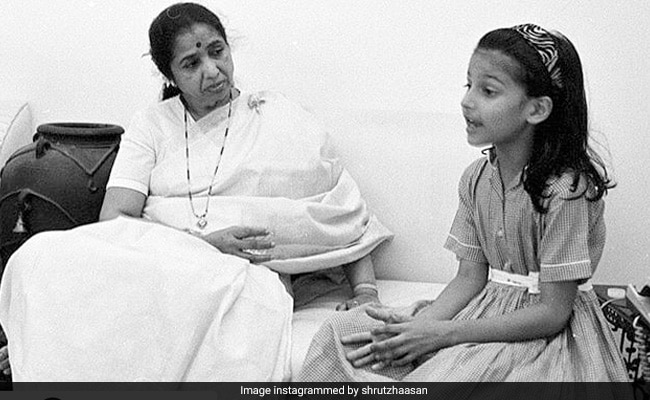 Asha Bhosle and Shruti Haasan have found a spot on the list of trends on Wednesday, courtesy a throwback picture from Shruti's childhood days featuring the singer. In the blast from the past, the actress, who is also a well-known singer, can be seen crooning a track in front of Asha Bhosle. Dressed in a school uniform with her hair pulled back neatly with a hairband, Shruti Haasan looks totally unrecognizable in this picture. Instagramming the throwback photo, originally shared a fan club on its respective profile on Tuesday, Shruti Haasan wrote: "I love this picture. I even remember this day and being so nervous to sing in front of the legend herself!" The actress then thanked the fan page for sharing the "beautiful memory": "Such a beautiful memory. Thank you so much for sharing."

#Repost @shrutzlovez with @get_repost Just a picture of @shrutzhaasan singing in her uniform I LOVE THIS PICTURE I even remember this day and being so so nervous to sing in front of the legend herself ! Such a beautiful memory - Thankyou so much for sharing @asha.bhosle

Shruti began her career in the music industry by singing the track Potri Paadadi Penne for her actor father Kamal Haasan's film Thevar Magan. She was just 6 then. Post that, she has crooned several songs for her father's films, including Chupadi Chupadi Chaachi for Chachi 420, Ram Ram Hey Ram for Hey Ram and Allah Jaane, Unnaipol Oruvan and Vaanam Ellai for Unnaipol Oruvan. She has also composed some of the aforementioned songs.

Shruti has also sung for several other Tamil and Bollywood films such as Luck, Hisss, Tevar, Shamitabh, Yennamo Yedho, Idhu Namma Aalu and Kadaram Kondan to name a few.

Shruti Haasan marked her acting debut with 2009 Hindi film Luck. Before that, she featured in a cameo role in Kamal Haasan's Hey Ram. Shruti's other films in Telugu and Tamil languages include Anaganaga O Dheerudu, Balupu, Race Gurram, Aagadu and Katamarayudu.